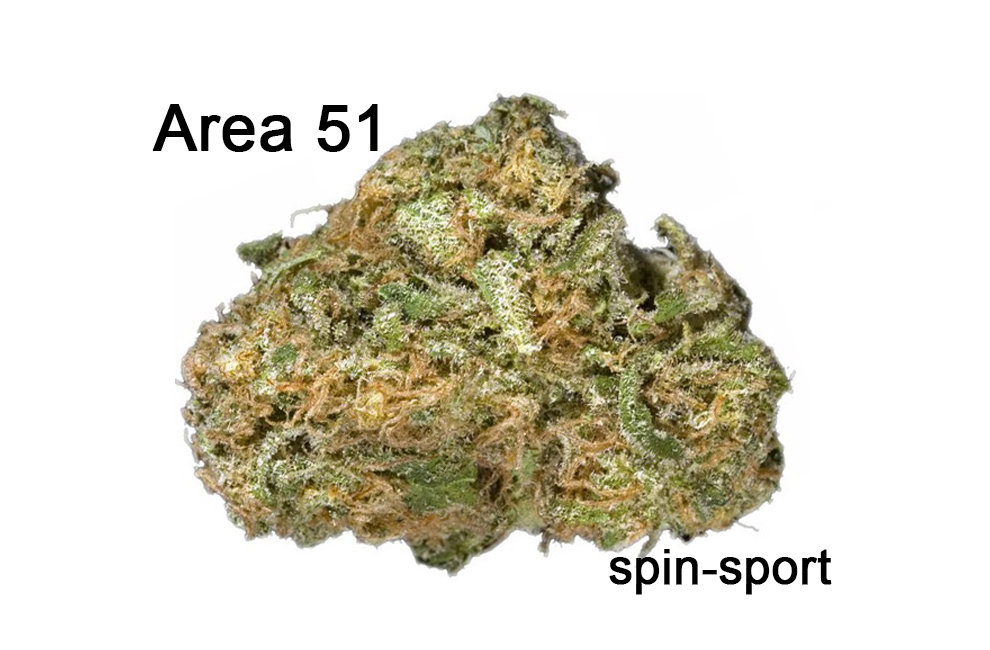 Area 51 is the famous subject of conspiracy theories. Due to the high secrecy surrounding the secret military installation, it has become an urban legend interwoven with stories of extraterrestrial beings and unidentified flying objects (UFOs). Despite this, it has greatly influenced urban legends including that of breeders from the cannabis industry.

A strain was, in fact, named after the mysterious base. Like it, it is ridden with riddles and enigmas especially with regard its lineage and how it came to be. However, there are many speculations over it being a Cannatonic and Alien Abduction accidental cross that emerged around 2010.

Although it leans toward, its bodily effects are on par with its cerebral stimulation. It has tingling body high that deeply relaxes users while inducing a euphoric head high with its potent THC levels of 20% to 23%.

During the onset, it delivers a cerebral euphoria that rushes through the mind. It clears away distractions as it sharpens focus, slowing down the fast-paced thoughts until one determines a focal point. For casual users, the mental clarity is a chance to review documents or work through tasks for hours. This is precisely why it makes for a great wake-and-bake companion that can be used in place of coffee.

Most of the time, however, users end up with an upbeat disposition. The high spirits proves to be a great addition to a social activity such as brunch or a small get together among like-minded friends. It leaves one feeling cheery as an innate sense of happiness builds up.

An hour or two later, a light buzzing pressure oozes down from the temples to the toes. It passes through the limbs, surging through the muscles, as it ebbs toward the toes. Blanketing users is a deep sense of relaxation that only intensifies with each toke.

Overall, Area 51 is best used in the morning or the afternoon. It delivers an upbeat high with sheer focus that allows one to power through the workday. Moderation is a must when used at night as it can keep one up for hours.

Area 51 has a dominant earthy profile that releases the scent of freshly picked flowers when broken apart. It fills the room with a pungent blend of lavender and pine with a hint of lemon. Upon combustion, its citric undertones take center stage.

Area 51’s acrid smoke fills the palate with its citric undertones of lemon. However, each puff drowns out the tanginess with the refreshing taste of pine and floral notes of lavender. On the exhale, it leaves an aftertaste of wet soil that lingers even after the last puff.

Feeling slightly dehydrated is commonplace while using marijuana. After all, it has cannabinoids that interfere with moisture production in the body. The symptoms are usually limited to dry eyes and a cottonmouth but it can sometimes be accompanied by dizziness. It can develop into a headache when consumed beyond tolerance levels. In any case, it is best to stay hydrated throughout the day while using the bud moderately.

Chronic stress is a phenomenon that has taken over the world in the last few decades. It had led to the early onset of various health issues or its exacerbation. This is precisely why it must be released from time to time. To this end, Area 51 works quite well. Its cannabinoids, such as THC and CBD, that provide people with a reprieve against the condition.

It delivers a wave of soothing euphoria that immediately enhances the mood. It uplifts low spirits and boosts confidence levels to stop self-depreciating thoughts in its track. Because of this, it works well as an anti-depressant that helps manage symptoms of depression, anxiety, and other mental health issues like PTSD.

Its invigorating properties also gets rid of muscle fatigue while simultaneously energizing the body. First, however, it relieves pains and aches beginning from the temples with its muscle relaxing properties. Hence, patients can use it to manage physical health issues such as chronic pain, spasms, and headaches.

Area 51 has a Sativa-leaning. It is relatively tall, thin, and quite sensitive to a lack of sunlight as well as a propensity for warmer, semi-humid climates. Facing the cool, and sometimes arid, weather of the northern hemisphere can be quite difficult for the plant. Moreover, it needs protection against the snow that could kill it overnight.

This is not to say that the plant does not flower well in the northern hemisphere. In fact, it flowers quite well. However, it does face difficulty when it comes to flowering early. Because of this, many users prefer cultivating the plant indoors.

Controllable environments have a lot of advantages. The most prominent of which is the ability to adjust factors like temperature, lighting, and humidity. Growers can install higher intensity lighting fixture to increase output and install a proficient ventilation system dries out any moisture that could possibly turn into mold or mildew.

Growers also have the option to choose between different types of growing mediums. A hydroponics setup will encourage faster bud and trichome production since it delivers nutrients straight to the roots. Meanwhile, using soil creates tastier buds and a more distinct flavor profile.

It works best with the Screen of Green, which requires training the plant by weaving its branches into a net that is installed right about the canopy. This setup distributes light evenly, therefore creating more budding sites. Topping is also another way to manipulate the plant. It keeps it short while ushering in the start of the flowering period.

Area 51 has an indoor flowering period of 10 to 12 weeks. At full maturity, growers can expect at least 12 to 16 ounces of buds per square meter.

The infamous Area 51 flowers between the last few days of October to second or third week of November. It yields at least 16 ounces of buds per plant.

Immediate feelings of euphoria are just one of the many reasons to love this lively strain. Area 51 is one of those rare and secretive breeds that makes you feel like a real sleuth if you can manage to get your hands on it. As this is a very social strain, when you do get the opportunity to indulge, bring a friend and share in the mystery.

How Much is a Draw of Weed