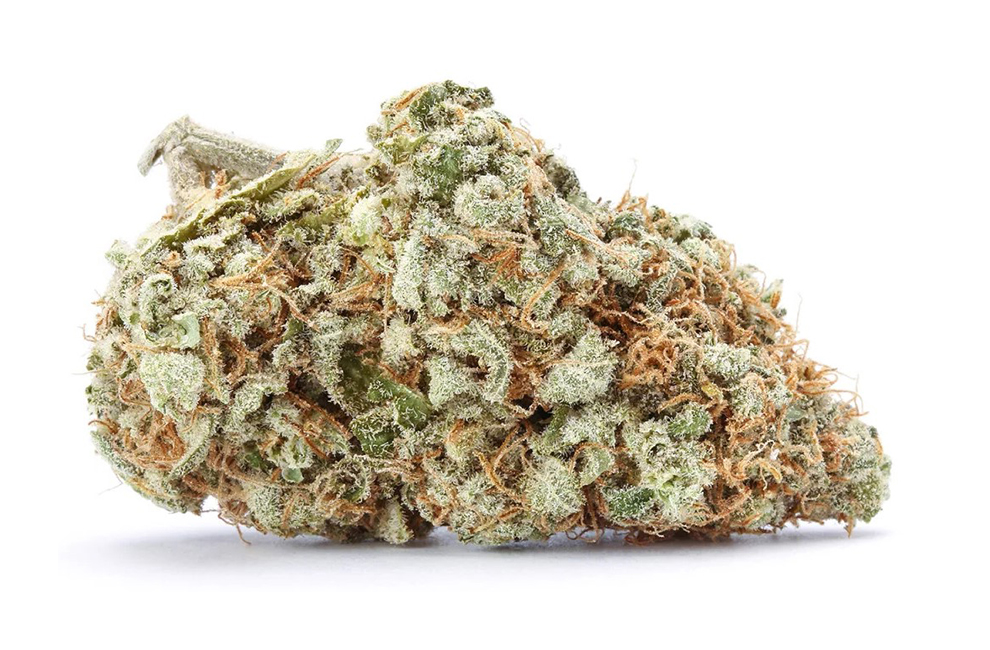 Banana OG is a powerful strain with a tendency to “creep” up on its users. Those that enjoy a smooth, gentle climb will love this strain. However, once users are at the peak of their high, they often have an uplifting and euphoric experience, followed by a state of complete relaxation.

Whenever an experienced marijuana user notices that a strain has “OG” in its name, they know precisely what to expect; smooth, mellow highs and an intense mix of terpenes that creates a complex aroma and flavor, filled with skunk, spice, and diesel.

However, despite the intense popularity of the classic OG Kush that causes this immediate association, people sometimes want a more varied flavor profile. Though the sour and distinct flavors and effects of OG Kush are desirable, these days people are often pursuing sweeter or more fruity flavors.

This makes strains like Banana OG perfect for this new generation of marijuana smokers. Combining elements from both OG Kush and Banana Kush, this strain boasts a noticeable banana flavor, with all the overpowering indica effects of its parents.

Let’s examine this strain and see if it manages to continue the OG Kush legacy.

What is the Banana OG Cannabis Strain?

Banana OG is an indica-dominant hybrid created by the cross of OG Kush and Banana Kush. This means that this strain is the product of two distant cousins within the Kush family being interbred, designed to create a potent mixture of banana-tinged kush.

The critical quality of Banana OG, besides its popular taste, is its entirely out of this world THC content, and thus its immensely powerful effects.

Banana OG is commonly known as “creeper,” due to its tendency to slowly creep on you after first imbibing it. In contrast to many other powerful strains, where the effects are noticeable almost immediately, this strain can you leave you feeling like nothing has happened and that your bud must be somehow defective.

This commonly leads to people smoking even more, possibly thinking that they have some kind of magical tolerance, only to then suddenly realize that their weed is actually effective after all. Then, all of a sudden, you realize you have smoked way, way too much.

Even if you have only smoked a reasonable amount, the eventual high will hit you intensely strongly, affecting both your mind and your body all at once. Though it is commonly referred to as an indica due to its 60% indica content, Banana OG’s hybrid qualities are very noticeable as you realize that the high is affecting seemingly every single part of your body.

Your mind will race, accompanied with an uplifting rush of euphoria that seems like a reasonably pleasant sativa, but then your body will suddenly slump over – your muscles will contract, your bones will feel limp, and you will realize that you have crashed onto your couch. Also, over an hour has passed without you even realizing it.

The high of Banana OG is the kind that, as it fades away over time, morphs into a series of different experiences. At first, you will get hit with that knock-out, all-encompassing effect that makes the whole world feel like its crashing down around you, but after a little while you feel incredibly relaxed, both mentally and physically.

It is similar to the sensation of finally sitting down after a long, physically active adventure. Your body will have a pleasant hum of contentment, like a napping cat, and you will experience a good deal of couch lock.

However, you won’t just be staring at the walls; you will be trapped in deep, intense thought patterns, so expect to find yourself over-evaluating your entire life and possibly even deciding to make significant changes to it.

You will likely want to enjoy Banana OG during the nighttime, as its utterly dominant indica effects won’t leave you with very much ability to do anything else.

Many people use this strain to help treat a variety of different medical conditions, as well as just generally helping to deal with adverse situations in their lives. This is one of those strains that is great at a lot of different things, depending on the strength of the dose that you imbibe.

However, underneath these mind-blowing effects is a subtle and complicated flavor profile that is often the primary reason many people seek out Banana OG.

As might be expected from a strain called Banana OG, the principle aroma that you will notice is one of fresh bananas. This fruity, tropical smell is undercut by a gentle citrus quality that is similar to citronella. Once you start to break open the brittle buds, an earthy spiciness will emanate forward, occasionally smelling of freshly cut grass, along with some pretty standard Kush aromas.

Despite it being called Banana OG, the actual aroma profile of this strain is very closely linked to its OG Kush parentage, offering a distinctly sour, nasal smell to its buds that are somehow both quintessential marijuana flavors and something entirely new at the same time.

Upon smoking this fruit strain, the very first flavor sensation is one of earthiness, undercut by a tangy tropical feeling. Think of the taste of a Capri Sun, or any other commercially available tropical-flavored drink. There is a sweetness that serves to remove the harshness of the tropical flavors, while not being so overpowering as to describe the taste as too sweet.

The exhale is strangely different, offering a profoundly hash-like, diesel-rich flavor that is extremely familiar to those that have ever enjoyed OG Kush or any other member of the Kush family.

There are notes of lemony citrus, as well as the occasional segment of spiced oak, making the whole taste experience of this Indica Hybrid strain somewhat similar to a very finely aged cask of whisky; the flavors are disparate, yet they seem to meld together and create something entirely new.

Banana OG may have a uniquely interesting flavor and aroma, but it somehow manages to be an almost caricature of marijuana strains everywhere. It has a typically pale green appearance, with tight and dense bud development that is pretty typical of indica varieties.

There are some attractive, orange-tinged pistils along the exterior of the bud, which provide an ever so slightly furry appearance, but besides that small quality, this strain looks like every other type of marijuana in the world, lacking any kind of exciting or distinctive color palettes.

The flowers of this strain, however, are surprisingly beautiful, with a profoundly amber hue to them that looks like the setting sun on a clear day.

However, you will never be able to see this for yourself, unless you grow it yourself, so what do you need to know to be able to grow some Banana OG yourself?

Banana OG seeds are available online, though only in a few limited places, such as the breeding retailer Breeders Apothecary Genetics.

This is only good for its cola development, so encourage it to do this as much as possible so you can end up with as high a quantity of bud as possible.

Trim off the top of the plant regularly, as well as any of the leaves that seem to grow around and above the already present growth. When performing pruning on your marijuana plants, you need to remember that you are working towards maximizing the sunlight that each individual leaf can obtain, so keep that mind when trimming it down.

Expect for the plant to begin flowering after about eight weeks, though it can be a bit later if it has been inadequately fed throughout its growing time.

Banana OG is not only an excellent strain for its taste and its effects, but it also serves to demonstrate a strain that possesses both incredibly high THC levels while also remaining flavorful and not overpowering on the palate.

While many indica strains have around 12.5% THC content, Banana OG can be expected to have a whopping 22% THC content on average, with some individual samples registering as high as 25%. This makes Banana OG one of the most potent strains available, capable of treating a variety of different medical conditions.

How about its CBD content? Is it equally present and able to help treat different conditions?

As ever with high THC strains, Banana OG has a typically very low CBD level. With no sample ever really registering above 1% CBD content, Banana OG is not a great strain to use if you are looking for medicinal benefits from CBD content.

Banana OG is primarily useful as a medicine due to its astronomically high THC content. When you imbibe a marijuana strain with this level of THC, it is able to work incredibly well with the body’s CB1 receptors.

By discouraging the release of the neurochemicals and brain functions that create the sensation of pain, Banana OG is a great strain to use when suffering from both physiological and psychological distress. Additionally, thanks to its massively euphoric effect that leaves you in a state of utter stupor, this strain is fantastic for helping deal with mental issues and depression.

Thanks to the fact that this strain has the seemingly magical ability to utterly banish any kind of physical movement of a desire to actually do anything, Banana OG is excellent at helping deal with issues related to insomnia. Though this strain won’t actually knock you out or put you to sleep, its intense feeling of relaxation and the general sensation of peacefulness is excellent at helping lull you into a blissful sleep.

Possible Side Effects of the Banana OG Cannabis Strain

By far the most noticeable side effects and perhaps the most serious are the propensities for this strain to cause both paranoia and anxiety.

This is likely due to its high THC yet low CBD content, as CBD was long ago linked to helping reduce incidents of paranoia and negative consequences from THC.

Regardless, the high level of THC within this potent strain means that, if you already suffer from bouts of anxiety or paranoia, you should probably stay away from it. The increased mental acuity and the combination of both couch lock and vibrant thought patterns would likely you leave you in a fearful, overly paranoid state.

Alongside these unpleasant side effects, there are the standard reports of both dry eyes and a dry mouth that any decently powerful marijuana strain causes, so just keep a glass of water handy to help deal with it.

Finally, this strain is well known for causing significant munchies, so make sure that you have some kind of snack or easily enjoyed food nearby to help satiate the inevitable bout of hunger that will quickly strike you.

Banana OG is almost a love letter to the practice of marijuana crossbreeding; by combining together two distant relatives in the Kush family, one being an original and another being distilled from many other strains, you end up with a mixture of both flavors and effects.

Not only can you enjoy a distinctly banana flavor that is tinged with the traditional flavor components of the OG Kush family, but you can enjoy a perfect storm of both indica and sativa effects that will leave you feeling both physically drained and mentally active at the same time.

Though this bodily dichotomy might seem disorientating to some, Banana OG’s intensely powerful effects make this one of the most effective and useful strains out there, so keep an eye out for Banana OG the next time you visit your dispensary.

You might get to enjoy one of the best examples of marijuana cross-breeding that breeders have to offer.