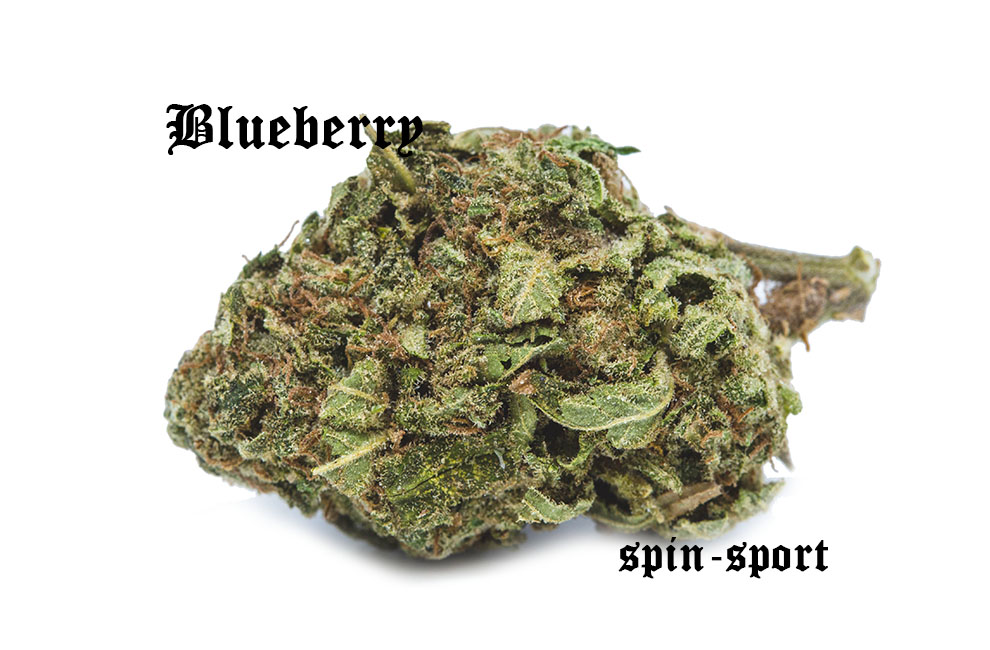 The Blueberry strain is coveted among cannabis connoisseurs and amateurs alike. The mouthwatering blueberry aroma is only one of many reasons that this bud is so sought after. A downright gorgeous plant, Blueberry also happens to feature high levels of THC (similar to platinum bubba kush) and offers a surprisingly happy and upbeat experience. Hoping to find a great strain for stress relief? This lovely Indica produces calm, relaxing, and euphoric effects.

It is an easy enough assumption to make that the intricate strains, the ones with a considerable depth of flavor and multiple different notes, are the superior ones. However, some of the very first strains that began rising in popularity in the western world were these simple strains, and they remain popular today because of two simple reasons – they work magnificently and, despite their simplicity, they taste amazing.

Blueberry is one of these strains. With a long and storied history that culminates in winning the High Times’ 2000 Cannabis Cup for Best Indica, Blueberry is world renowned for both its clean, elegant flavor and for its empowering, relaxing effects.

Let’s take a look at this great strain, both its history and its flavors, as well as what you can expect after trying some.

All About Blueberry Strain

Blueberry is generally thought of as an especially common strain – it lacks an interesting and memorable name and has a pretty obvious flavor profile. However, the fact that it is a pretty simplistic strain doesn’t stop it from being one of the best.

Blueberry was created as early as the 1970s, when American breeder DJ Short was crossbreeding landrace strains – strains that developed and evolved in the wild without human interference. His eventual finished strain was dubbed Blueberry for its clear and consistent flavor of fresh blueberries.

Due to the fact that Blueberry is a strain with ancient lineage, there is a vast disparity between individual plants. Breeders have been meddling and tampering with DJ Short’s original recipe for so long that it is entirely possible that you might get yourself some Blueberry bud only for it to be very different from the ones you have smoked before.

This tends to happen with crossbred landrace strains, especially ones as popular as Blueberry. As long as it tastes firmly of blueberries, you can be reasonably sure of what you have, even if it is slightly different.

Though Blueberry is commonly referred to as an indica, it is actually a hybrid with lineage in Afghani and Thai Strain landrace strains. It is 80% leaning towards indica, however, so the majority of its effects are entirely indica related. However, that small percentage of sativa helps give this strain an excellent undertone of cerebral energy, steering Blueberry away from being an entirely couch-locking strain.

This strain first showed up on the scene in the 1970s and since has become the proud parent of many popular offshoots. Blue Dream is one of them perhaps the most well known to cannabis consumers. An award-winning Indica, this lovely lady took home a High Times Cannabis Cup award back in 2000. You can also find Blueberry listed as DJ Short’s Blueberry.

It’s tasty, easygoing, and moderately sedative. The healthy combination of both indica and sativa landrace strains provides a unique hybrid experience. Though, the body high takes heavy predominance, which is why Blueberry is classified as an indica strain.

Overall, Blueberry offers a deep physical relaxation and a general feeling of peace and contentment. The Thai heritage provides a decent dose of mood uplift and euphoria. The effects tend to be long lasting and do not overpower the consumer, which are two excellent reasons to love this strain.

Some find Blueberry to be quite lung expensive, so watch out for a cough or two. It is also a known appetite-booster, so having some snacks on hand will make the experience even more enjoyable. It’s not uncommon to find yourself ready for bed as the effects begin to wind down. But, this strain isn’t your classic couch-locking indica. Rather, it’s a laid-back, calm, and contented flower.

While this flower has a bit of a cult following, it’s important to not underestimate its overall strength. Moderate cannabis consumers can get by with lower potency samples. Yet, experience with cannabis is recommended for flowers that reach over 20 percent THC.

Don’t be surprised if you find a goofy grin spread across your face shortly after consuming. This strain often kicks off with an upbeat, happy-go-lucky kind of high. After about a half an hour, you may find that your eyelids begin to droop and some of the blissful, euphoric sedation takes hold. While the strain might be a little on the drowsy side, it can certainly help you unwind and let out a few laughs.

Upon first smelling Blueberry, you will predictably be hit with the intense smell of tart, pungent berries of the blue variety. Oddly enough, as the smell continues, it may begin to remind you of the common Purple Thai strain.

There is a continuing complexity in the aroma that doesn’t have anything to do with blueberries, but instead a strangely musky, spicy quality that is quite similar to many other landrace indica strains.

Alongside this initial flavor of blueberries, spice, and muskiness, there exists a subtle amount of skunk and petrol, far more than you would expect from an indica strain.

The aroma of Blueberry is extremely separate from what you would expect, carrying with it inherent complexities far beyond the taste of pure berries.

The flavor, however, is far more straightforward.

As might be expected from Blueberry, the overwhelming taste sensation is one of freshly picked blueberries. But there is a bit more subtlety to the taste of blueberries than you first might think – for instance, blueberries taste different depending on their ripeness, as well as their season.

The taste of Blueberry cannabis is one of the slightly overripe Blueberries, only recently picked. There is an inherent sweetness that is almost cloying, similar in a way to when you taste sugar straight from a spoon.

Despite the fact that you are obviously smoking the bud itself, there is an extremely potent feeling of fresh blueberry juice exploding in your mouth. Despite how impossible it might seem, the taste of Blueberry isn’t just pure blueberries, but some of the very best blueberries you have ever tasted.

Like many other indica-dominant varieties, Blueberry tends to have quite dense nugs. Due to its high quantity of anthocyanins (a pigment that develops as a result of prolonged sun exposure and unique indica genetics), the bud will typically turn an interesting swirl of purple and red. This will only really develop if allowed to dry properly, as well as growing them well enough to reach their full potential.

So, what do you need to know if you want to try and grow your own Blueberry? Are there any advanced growing techniques that you need to get that beautiful color?

Famous breeder DJ Short is a legend in the cannabis world. His skill has given us some of the most unique strains in the world, and this herb is the most popular. Blueberry features a striking sweet berry aroma with herbal hints.

Blueberry is a cross between three landrace strains, Afghani, Purple Thai, and Thai. Sativa lineage in this strain stems from the Thai cultivars. However, the Afghani wins out and provides hefty indica sedation. It averages around 18 percent THC, though this number can rise to over 24 percent depending on growing conditions.

Blue in more than just name, marijuana enthusiasts will delight in the dark blue flecks of color that dot this strains pale green leaves. Like splatters from a painter’s brush, these blue tones appear when the plant has been exposed to cold temperatures at the right time, activating the anthocyanins within the leaves. Blueberry tends to be a high-yielding plant, with flowers that also feature gorgeous red and purple.

A cloudy layer of trichomes gives these already handsome nugs a real twinkle. They also make for some really sticky weed, marijuana consumers will want to keep a grinder nearby if they don’t fancy leaving with sticky fingers. All in all, this strain has some excellent shelf appeal.

Blueberry is not just famous for its great effects and its unique flavor, but it also well known for its sheer intensity.

You can expect anywhere from 16% THC all the way up to 23.5% THC, making this strain potentially one of the most powerful indica strains out there. You can typically expect around 12.5% for an average indica, so at the very highest range, Blueberry can have almost double the average indica’s THC levels.

As ever with indica strains, you will obviously have a lot less CBD than you will THC.

In general, you can expect about 0.26% CBD in your Blueberry, with the upper limit being around 0.5%. This is generally due to a distillation through generations of breeding landrace strains, all to try and create the most robust final result possible.

Appealing flavors and a great look are important, but this strain achieved legendary status by adding some potent medicinal benefits.

As with any powerful strain, it is essential to know just what kind of medical conditions it could help to treat. After all, not every single user of cannabis is looking for the most potent high – some are actually looking for helpful medicinal treatments.

Like many indicas with a powerful effect, Blueberry is most useful to try and treat stress and pain, as well as feelings of depression or anxiety.

Due to the way in which the high quantity of THC interacts with the endocannabinoid system, Blueberry is a great strain to combat mental disorders or general issues of unhappiness. If you are feeling the pressure of day to day life, Blueberry helps remove this pressure by encouraging a happy and healthy mood and outlook on life.

Additionally, Blueberry is excellent to help treat insomnia. This isn’t necessarily because it forces you to go to sleep, as some other strong indicas do, but merely because it helps suppress those negative or stressful thoughts that often stop people from falling asleep.

Instead of knocking you out, Blueberry makes it easier to fall asleep naturally, albeit with a fantastic mood and a general feeling of relaxation and calm.

One other condition that can be treated is general feelings of pain, especially neuropathic pain. Due to the slightly soporific and overall relaxing effects of Blueberry, it is effortless to help get rid of any kind of unpleasant pains that are disrupting your day.

With all these positive medical effects there comes a certain expectation of side effects – after all, every medicine has side effects, right? What kind of side effects can you expect from your Blueberry strain?

In many ways, Blueberry is a surprisingly complex strain; it possesses powerful effects that defy its traditional classification as an indica, and its taste profile is far more sophisticated than simple blueberries.

However, when it comes to its side effects, Blueberry is woefully banal – it is precisely what you might expect.

Users of Blueberry can expect the ever-present dry mouth and dry eyes that have plagued marijuana users for years. Keep a wet towel on hand if you frequently suffer dry eyes, as well as a glass of water nearby to help quench the throat.

Other than that, some few users have reported instances of dizziness or other feelings of head disorientation; just make sure you are relaxed and in a safe place and you will most certainly be fine.