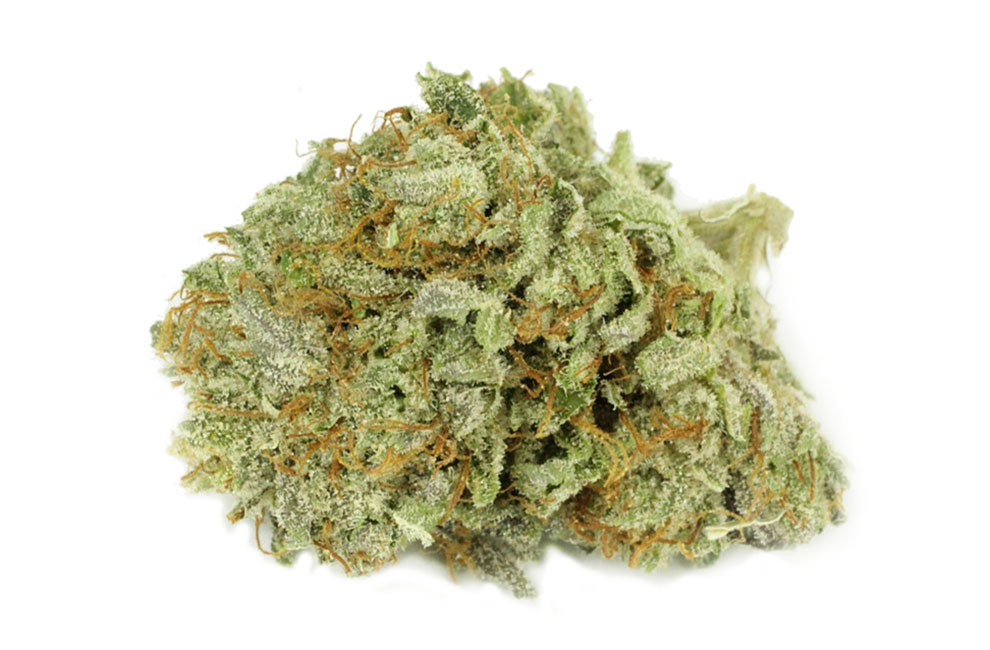 Dark Star is a strain that smells like all the dark fruits: grapes, blackberry, raspberry. It offers a deep relaxation and sedation to its users and has a modest, yet sufficient 16% average THC content. It even looks like a star, covered in its bright and exuberant trichomes. Dark Star is great for evening to night time usage.

According to Newtonian mechanics, a dark star is a theoretical object of enormous mass, and its surface escape velocity at least equals the speed of light. In other words, any light emitted by a dark star’s surface will become trapped by its gravity, causing it to become dark and essentially invisible to an astronomer.

In literature, a dark star is someone who is miserable but hides behind a façade of happiness. Fortunately, the Dark Star strain carries no such subterfuge. It is a dank strain that comes from two well-known parents and is said to have several useful health benefits.

Dark Star strain weed is almost entirely indica and is a cross of Mazar-I-Sharif and Purple Kush. The former won second place in the High Times Cannabis Cup in 1999 in the Best Indica category. It was first bred by T.H. Seeds who did so indoors, and who probably named Dark Star after a Grateful Dead song.

The Dark Star marijuana strain offers an earthy scent with hints of pine. As it reaches maturity, you may also get the smell of blackberries.

Not everyone is enamored by the aroma of Dark Star, but it certainly excels in the taste department. While there is an earthy taste, you also get hints of grape and berry for an overall pleasant smoking experience.

One thing you are sure to notice is the dense round nugs which are coated in gleaming trichomes. It is obvious that Dark Star is a resinous plant. It is a type of weed that looks aesthetically pleasing even in a bag, and we recommend gazing in wonder at the beautiful plants as they go into bloom. If you look closely, you may also see dark purple inside and outside of the buds.

Once you purchase Dark Star strain seeds, you have the option to grow indoors or outdoors, although the former is preferable. If you elect to grow this strain outside, it requires a warm environment with plenty of sunlight to thrive. If you decide to grow it outdoors, Dark Star will enjoy even better vegetative growth if you add high-intensity lighting and ensure it gets a minimum of 18 hours of light each day.

When you go down this route, you should see your plants growing at warp speed, and they will produce large leaves. Dark Star is ready for harvest outdoors by the end of October and produces up to 24 ounces of bud per plant.

If you decide to grow this strain inside, you can use soil as your growing medium, or an inert medium as part of a hydroponics system. This plant has a fat and bushy structure and requires lots of feeding. Make sure you keep the humidity level in the right range and invest in good air conditioning to prevent mold.

If you grow Dark Star indoors, its flowering time is approximately 10 weeks. Your yield should be in the 14 to 18 ounce per square meter planted range.

In general, the THC content of Dark Star cannabis ranges from 13% to 19%, but some phenotypes have tested at 22%.

Dark Star is also relatively high in CBD. Certain cuts contain up to 1.8%. While this may not be enough for patients with epilepsy, it does ensure this strain has ample medicinal value.

Most cuts of Dark Star weed will be in the teens in terms of THC. It seems bizarre to say this, but by modern standards, it means this strain isn’t especially potent if you are an experienced user. However, novices will soon regret it if they overindulge.

As it is an almost pure indica, Dark Star offers a potent body high that could cause couch lock. However, it isn’t quite the same as other sedative strains. Dark Star is more than capable of providing you with a high that results in you becoming spaced out. Ideally, you will use this strain in the late evening or on a day where you have little or nothing to do. It is an excellent cannabis strain if all you want to do is chill out and relax.

The relatively high CBD content of Dark Star means it is a favorite amongst medicinal marijuana users. One of the primary reasons to use Dark Star is to combat stress. For the record, in 2014, the American Institute of Stress suggested that 77% of Americans regularly experienced psychological symptoms caused by stress. In 2017, the same body claimed that 63% of Americans were stressed out about the future of the nation.

In other words, a LOT of people suffer from stress, and Dark Star could prove to be extremely useful. It also has potential value for individuals with issues such as PTSD, anxiety, and depression.

Dark Star has gained a reputation as an effective analgesic. Therefore, if you have chronic pains or muscle spasms, you may love the physical body provided by this strong indica strain. Insomniacs might also enjoy the sedative effects of Dark Star. Not only does it help you drift off to the land of sleep, but it also doesn’t provide a potent psychedelic high that may otherwise hamper your sweet dreams.

The main adverse effects include dry mouth and dry eyes, which can be said for a significant proportion of marijuana strains. There is also the potential for dizziness, mild headaches, and an increase in anxiety if you use too much Dark Star. Otherwise, it is best if you save this strain for the evening or night time because it will quickly cause you to stick to your sofa or bed, with no intention of moving any time soon.

Overall, Dark Star marijuana doesn’t have an aroma that will cause your mouth to water, but you should enjoy the flavors on the inhale and exhale. It is strong enough to warrant respect, but experienced users shouldn’t have too many problems. As Dark Star is almost completely indica, it is an ideal night time strain as the body high it causes helps you relax and unwind.

Dark Star is not a strain for novice growers as it requires a reasonable level of skill to cultivate. If you are an experienced grower, you will be rewarded with a generous yield.