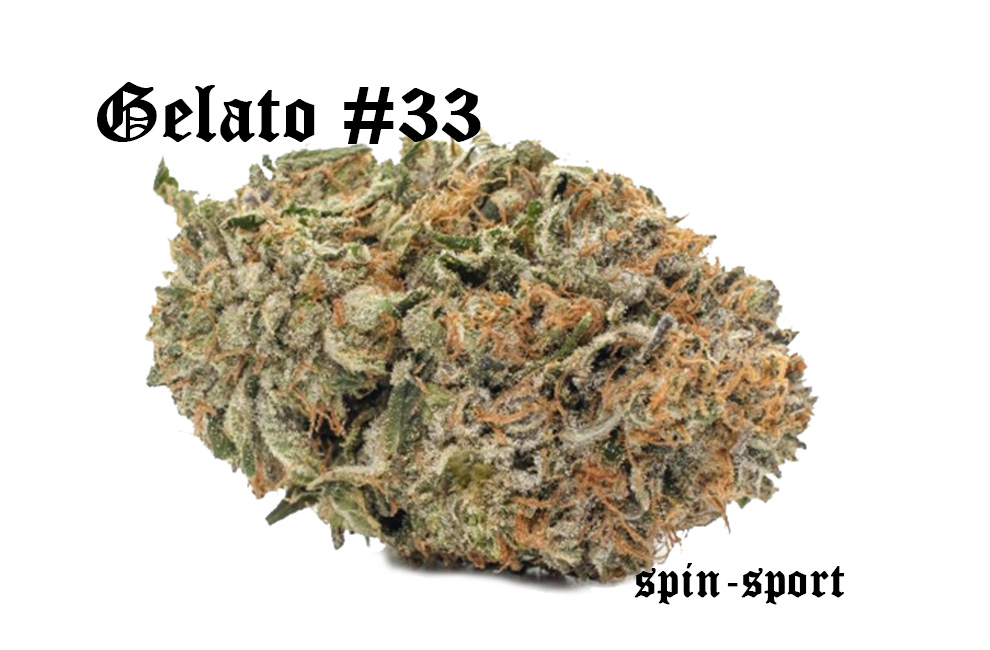 If you need a balanced 50:50 hybrid, Gelato 33 might just be the best choice for you. Gelato 33 delivers both an energizing sativa head high and a relaxing indica body high at the same time. It helps you focus on daily tasks while also keeping you calm and relaxed. As such, it’s a great strain to use at any time of the day, whether you need to be productive or just want to kick back.

As you might guess from the name, it’s also a sweet-tasting strain. It’s a cross between Sunset Sherbet and Thin Mint GSC resulting in a delicious mix of flavors. If that’s not enough, it’s also helpful for all kinds of medical issues. So what are the effects of Gelato 33, how can it help you, how does it taste, and where can you get it? Here’s our strain review for Gelato 33.

What is the Gelato 33 Marijuana Strain?

Gelato 33 originated in San Francisco with the legendary Cookie Fam and has a THC potency ranging from 18.5%-22%. This hybrid is a cross between Thin Mint Girl Scout Cookie and Sunset Sherbert. Though slightly indica-dominant, this hybrid is nearly equally balanced to give you a relaxing high that won’t put you to sleep.

Thin Mint Girl Scout Cookie, Gelato 33’s first parent, is a descendant of the legendary OG Kush, a strain that has been a staple for regular and occasional cannabis smokers since the 90s. Highly psychoactive, Thin Mint GSC gives Gelato 33 its signature euphoric effects.

Sunset Sherbert Strain, an indica-leaning hybrid, is the child of legendary GSC, the perfect pairing for the rich ancestry of Thin Mint GSC. Sunset Sherbert helps to put consumers in a carefree mindset and helps to make Gelato #33 a calming strain, perfect for relaxing any time of the day.

Gelato 33 is seen by many users as the perfect hybrid. It has a brilliantly balanced 50:50 ratio of indica to sativa. As such, you can enjoy both the soothing effects of indica strains and the stimulating effects of sativa strains all in one.

When you take a hit of Gelato 33, you’ll instantly feel more happy and euphoric. It’ll boost your mood and make you giggly and social, making it a great strain to enjoy with friends. Your mind will feel stimulated and creative, and whether you choose to watch TV, play games or chat with friends, the heightened senses will make any task more fun.

Meanwhile, the indica effects will also spread throughout your body giving you a nice, calming effect. It isn’t overwhelming to the point of being sedating, but it is enough to take away physical tension and help you relax. This makes it a brilliant strain for anyone who wants to chill out without feeling too out of it.

The well-balanced effects make Gelato 33 a solid all-rounder. Whether you need a stimulating wake-and-bake strain, a daytime strain to keep you focused or an evening strain that’ll physically relax you, Gelato 33 can suit every purpose.

Gelato 33 is a named phenotype of the world-famous cross between Sunset Sherbet and Thin Mint Girl Scout Cookies by the same name: Gelato. Out of all the named phenotypes floating around, Gelato #33 is the most special since it retains its famous Girl Scout Cookies family funk, flavor, and bud structure. This balanced hybrid checks in around 19-23% THC, making it the perfect choice for cannabis medicine and recreation alike. It boasts mouth-watering flavors of citrus and tropical fruits that promote an energized and uplifted headspace, making it one of the most popular choices available for medicating at any time of day.

Possible Side Effects of Gelato 33

Because of its intense headiness, Gelato #33 may not be a good choice for individuals that are prone to fall into a negative headspace. That said, the psychoactive effects of Gelato #33 don’t last long and might be a good choice if you are interested in experimenting with headier cannabis strains.

Gelato 33’s other common side effects include drowsiness, dry eyes, and lethargy. Though drowsiness is a side effect of Gelato #33, some consumers may find these effects helpful for relieving insomnia and other sleep disorders.

Gelato #33 is rated moderately difficult to grow. As a phenotype of a named strain, Gelato #33 seeds aren’t the most accessible. However, if you do secure a cut of your own, the strain grows relatively easily. Since it adopts the best traits of both indicas and sativas, Gelato #33 grows both tall and bushy. It takes a lot of care and training early on to ensure that its growth stays manageable. She will need regular trimming to encourage floral growth instead of foliar growth when she flips into the flower cycle. It’s also worth mentioning that her flowers are incredibly thick and dense. In areas of high humidity, monitor the flowers and humidity levels closely to avoid any issues with mold or powdery mildew.

Gelato #33’s appearance can range during its life cycle, though its vegetative and foliar growth will always be a dark shade of green. Each water and sugar leaf grows in a standard hybrid fashion, broad and angular. The difference is the flowers. While many Gelato phenotypes tend to take after the Sunset Sherbet parent, the Gelato #33 strain follows the dense, tightly-packed structure of its Girl Scout Cookies family genes. Depending on the climate, the buds themselves can range from shades of green to dark royal purple. However, the thick blanket of misty trichomes and fiery orange pistils remain regardless.

Gelato #33 became a uniquely named phenotype thanks to its unique flavors and aromas. Unlike the standard Gelato (which offers a rich creaminess and mild fruit flavors), Gelato #33 offers a powerful punch of fruit flavors and citrus. While it’s flowering, the strain promotes a seriously sweet herbaceousness that can take over an entire room. As it dries, the herbal scents mellow out and the fruity ones take hold. When this strain gets ground or chopped up, it smells a lot like the red Hawaiian Punch with a distinct creaminess behind it that makes for a mouth-watering aroma.

When Gelato #33 is smoked, the fruit flavors take hold nearly instantly. The first impression of the strain is that it’s quite sweet and herbal with a lot of tropical fruit notes, including pineapple, grapefruit, and white peach. The smoke is thick and creamy, boasting a drool-inducing sweetness that demands you take a moment to appreciate it. The exhale leaves behind a final impression of a creamy fruitiness that leaves you feeling uplifted, refreshed, and relaxed. All in all, the overall impression of the Gelato #33 strain is that it’s sweet and fruity, similar to the Hawaiian Punch fruit punch you can find at the grocery store. A flaver that some compare to that of the zookies strain.

After the final exhale, the Gelato #33 effects grab you. It promotes a bright cerebral buzz that’s perfect for light conversation, focusing on a game or a project, or getting creative. As the cerebral effects root, the physical effects also join in. Gelato #33 promotes a soothing sensation within the body that can relax muscles and soothe aches and pains. Many Gelato #33 users say that the combination of uplifting mental effects and soothing physical effects boosted their arousal and made sex more enjoyable, alongside the other effects. All in all, it’s a balanced option for physical relief and mental euphoria that can help you feel more relaxed, creative, and happy.

The even mix between indica and sativa effects isn’t just ideal for recreational users. Gelato 33 can also help with all kinds of mental and physical health issues. Whether you need something to improve your mood or something to decrease your pain, Gelato 33 can help.

The stimulating head high is perfect for those who need relief for things like anxiety, stress, and depression. Studies show that cannabis can reduce symptoms of anxiety, depression, and chronic stress in just a couple of puffs, and Gelato 33 is a fantastic example of this. It’ll make you happier, take away your worries, and even give you some extra motivation.

The calming body high is also great for pain and inflammation. While those with severe chronic pain symptoms may want a more powerful indica strain, Gelato 33 is ideal for general pain relief. It’ll also help with other kinds of tension such as headaches, migraines, aches, and strains.

It does have some minor side effects. Naturally, you can expect to experience dry eyes and dry mouth when you smoke enough. The stimulating effects may make some users more anxious, and they also aren’t ideal if you’re looking to combat insomnia. However, for the most part, Gelato 33 is a great medical strain that gives you well-rounded benefits.

Although Gelato 33 is a solid choice of strain, there are many other options. Whether you want something that leans more towards sativa or indica or another tasty hybrid, here are some alternative choices.

If you need a strain with a perfect balance of indica and sativa effects, Gelato 33 will suit you. It can stimulate your mind, enhance your senses, and relax your body all at the same time. Plus, its sweet taste makes it all the more enjoyable. You can indulge in this strain at any time of the day thanks to its well-balanced hybrid properties.

Gelato 33 is a practically perfect, super-balanced hybrid cannabis strain that mixes the best of psychoactive and physical effects. Though this weed strain hits hard on your first inhale, Gelato #33 eases into a mellow high that may help to relieve achy muscles, tension, stress, and anxiety. Smoke this sweet, dessert-inspired marijuana strain to relax after a long day at the office, to prepare for a night out with your favorite people, or to prime yourself for a lazy day at home with a creative project, your favorite tv show, or a short to-do list.