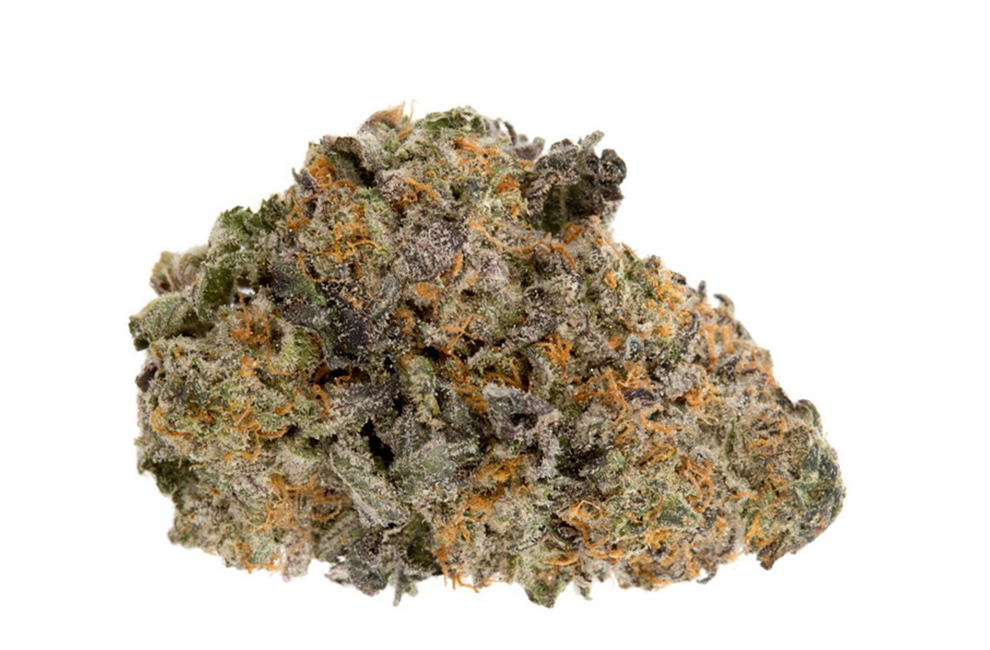 Gelato is a balanced hybrid, which tilts a tad bit in favor of Indica, that traces its parents to thin Mint Girl Scout Cookies and Sunset Sherbet. Having a cannabis strain, Gelato, nicknamed after NBA legend Larry Bird is no disrespect to the hall-of-famer. Certainly, it does not suggest that the player turns to gel when the lights shine the brightest, and he cracks under the pressure. No, there is another reason for that, which will be covered in the next section.

Named for the way in which it impacts the taste buds and senses with pure, dessert-like pleasure and sweetness, the Gelato marijuana strain has begun to overwhelm the world of cannabis – and in a pretty beautiful manner.

Sometimes referred to as Larry Bird, Gelato was initially bred by the geniuses over at San Francisco’s Cookie Fam Genetics.

Many phenotypes of Gelato were released over time by these masters, but phenotype number 33 is the one most often associated with the strain – hence the name ‘Larry Bird’ (the basketball legend’s old number).

Beyond its naming and origins, Gelato marijuana has become world-renowned for its unique and impactful effects, which are well–balanced and won’t cause you to end up crashing in the end. Whatever your current “stoner status” may be, you need to try the Gelato weed strain; with its sweet citrus color and taste, it will very likely send you out of this world.

Gelato Strain What is it?

When Cookie Fam Genetics decided to cross Thin Mint Girl Scout Cookies with Sunset Sherbet, what they ended up with was somewhat unexpected. Through much trial and error, they finally produced a phenotype that they were happy with, and this strain has become known as “Gelato.”

A well-balanced hybrid that leans slightly more indica, this gorgeous and delectable weed type includes roughly 56% indica and 44% sativa genetics, yet seems to offer overall energizing and uplifting effects – not always the case with strains that contain more of the sedative indica genes.

One of Gelato’s features that really sticks out, however, is its immense THC content – usually around 18% even in the lowest recorded test results.

The THC content of most specimens ranges between 20-26%, which is of course plenty of punch for those who desire herb that not only lasts a while, but also requires very little flower to actually be consumed before the strong effects are experienced.

Gelato presents the cannabis community with an original origin and intriguing genetic history, all tied together by the fact that this cannabis type is as delectable as your post-dinner treat — and promotes deep physical relaxation with flavors of citrus, berry, and sweet treats.

Following in the footsteps of its parent strains (Sunset Sherbet and Thin Mint GSC), Gelato is in essence named after the popular Italian dessert. It is a tantalizing hybrid cannabis strain with buds that tend to bloom in dark purple hues, and illuminated by fiery orange hairs that are gorgeous to glance upon.

Traces of Gelato’s parent, the Sunset Sherbet, can be detected with the smell of pungent orange. But once it is grounded, an earthly hint is added to its aroma. It takes its sweet aroma from its other parent, Thin Mint Girl Scout Cookies. As a result, Gelato has one of the most agreeable aromas among cannabis weeds.

Gelato has a distinct taste with an aftertaste of berry and citrus. Its taste is also its greatest strength compared to other strains as this one has a more universally agreeable flavor. One thing to note is that it does have a pungent smell. That means there might be people nearby who may smell it.

Where to Buy Gelato in the USA?

Although Gelato is not the easiest strain to come across here in the USA, it is possible to buy this marijuana type in some of the better-stocked, more well-known cannabis dispensaries (typically recreational shops as opposed to medical).

Thanks to the indica influence, the Gelato marijuana strain only grows a short to medium height, meaning that its stature is especially suitable for those who wish to grow this crop indoors and simply don’t have immense amounts of upwards space.

It is a beautiful strain to look at and watch during the growing process, as its buds are stunning – especially when fresh. Beginning the cultivation of this crop is probably the most difficult part of the process, because obtaining seeds (or clones) is not always an easy task. The best way to start is by knowing someone that has access to these plants, because then you can snag one off of them (if they’re willing to part, of course!).

Gelato, unfortunately, isn’t the easiest strain to grow, but it can be successfully accomplished either indoors or outdoors by utilizing proper techniques and by carefully monitoring the maturation process. Indoors, a grow tent is best because this strain requires a specific temperature and condition to flourish. Inside the tent, it is easier to monitor and adjust these levels. The environment must remain warm and humid for success.

Outdoors, you’re better off residing in a pretty tropical climate in order to be successful with Gelato. The best conditions for this crop is to begin with warm and humid temperatures, but just before the flowering period. If this plants can be properly exposed to a cooler temperature that is still humid, it can improve the quality and yield of the buds.

Flowering period arrives around 8-9 weeks for Gelato marijuana, and the specific yield can vary but it is said to be at least above average – so expect your hard work to pay off once the medicinal product is ready for drying and curing.

An especially hard-hitting option, those who are complete novices should ease into Gelato marijuana using some caution, as its maximum 26% THC content is no joke. Just a tiny bit of this strain can go a long way for those just starting out their cannabis journey, but once the effects do hit, they send you into a state of sweet bliss and euphoria.

Although Gelato weed has slightly indica-dominant genetics, it usually doesn’t leave the consumer feeling sedated or tired, which is perhaps why it’s become such a fan favorite.

Rather, Gelato cannabis creeps into the head, leaving a high that is predominantly cerebral and focus-bringing, yet simultaneously soothing and tranquil. This typically contradictory combination truly works with Gelato, teaming up in a way that is not only pleasant for the consumer, but also equally as medicinal.

The strain’s positive effects include filling its consumer with happiness, creativity, relaxation and euphoria. Ideal for social gatherings, creative ventures, and for productive afternoons when you need to have a lot of focus, this Gelato weed is quite multi-faceted, and can be used for many purposes.

Beneficial on both a physical and mental level, the Gelato cannabis strain has many medical benefits that are capable of assisting individuals from all walks of life. On a physical level, the strain’s body-relaxing effects have been said to help with muscle spasms, inflammation, cramping, headaches/migraines, and chronic pain. If consumed late in the evening when your body is naturally-inclined to go to sleep, it capable of assisting with insomnia or other sleep issues.

Because the Gelato strain is already quite strong in terms of THC content, you may not have to search for an alternative method of consumption to receive the care you need. If you prefer to stay away from smoke and intake a gummy or candy (or something else) instead, it might be challenging to find Gelato edibles – but they do exist. Luckily, if you are comfortable with smoking marijuana, this option is (obviously) available, and carries plenty of potency.

In terms of mental effects, depression, anxiety and stress are the three conditions that Gelato seems to have the greatest effect upon, and this strain brings about a lot of relief from those who have difficulties managing these often debilitating occurrences.

Since Gelato marijuana is so potent, only a few hits should do the trick – and actually, over-consumption of THC can cause an increase in paranoia or unwanted anxiety among those who are diagnosed with mood disorders, or conditions pertaining to the mind. For this reason, it is best to start out slow and build from there once you feel more comfortable.

Possible Side Effects of Gelato Weed

With no reported out-of-the-ordinary negative side effects (at least that we’re aware of), Gelato marijuana is quite a dream for those who would like to stay away from anything adverse in terms of things that can arise with “faulty” cannabis.

The initial impact of Gelato marijuana comes on quite quickly and with abrupt intensity, so sometimes consumers can experience a moment of dizziness.

On especially rare occasions, mild anxiousness may be felt about 30 minutes to an hour after the initial hit is smoked.

Also, slight dry mouth (cottonmouth) and dry eyes are also possible with the Gelato marijuana strain, but these two adverse effects are easily manageable with a little extra preparation and planning. By consuming plenty of hydrating fluids before, during and after your high, you can not only diminish the dry mouth, you can also prevent any headaches or grogginess the next morning – in addition to keeping your body healthy and hydrated (which is beneficial no matter what).

All things considered, be sure to keep a bottle of water close by at all times, in case you feel lethargic and don’t want to get up (the sight of the bottle in close proximity can also serve as a kind reminder to drink periodically).

Overall, those who are considering consuming the Gelato cannabis strain should not be concerned about possible negative side effects, as they appear to be fairly mild combined to most other high-THC strains.

Overall, the positive effects and medical benefits of Gelato weed are quite impressive, while the negative effects seem to be minimal and manageable. If you are an individual searching for an herbal alternative to conventional treatments for chronic pain, inflammation, muscle spasms, depression, or anxiety, then Gelato just may be a strain that can provide a solution for you.

We hope this review has not only been entertaining, but also educational and informative. It is important to remember that the consumption of pot is the sole responsibility of the user, and discretion should always be taken.