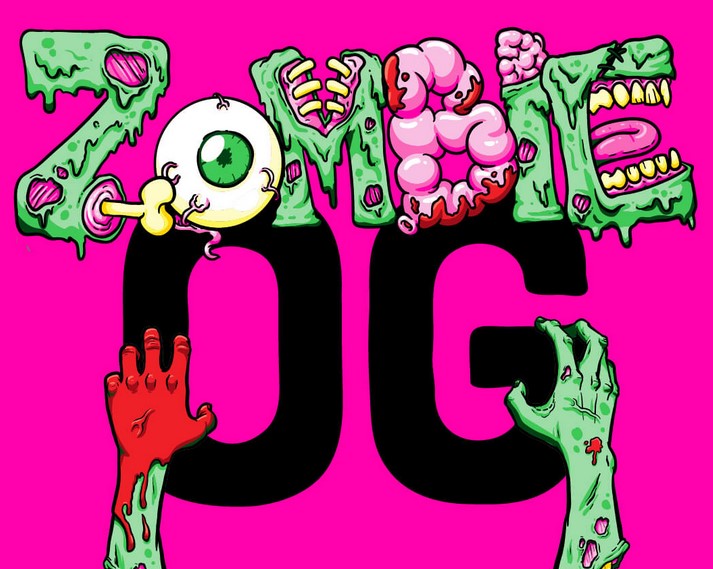 Zombie OG, aka Zombie Kush, is an indica dominant hybrid cannabis strain named from the intense body high it creates in the consumer, creating a deep sedation, mood, and hunger reminiscent of zombies – though it may be difficult to leave the couch to grab a bite.

An indica-dominant hybrid (90 percent Indica, 10 percent Sativa) Zombie OG is a cross of Blackberry and OG Kush. THC tests show a range of 18 to 21 percent THC and 0.3 percent CBD. This strain won a prize in the 2015 High Times NorCal Medical Cannabis Cup. While the CBD is low, the mostly Indica effects work well for medical patients and recreational consumers who want to zone out and become zombies – the relaxed kind of course, not the “gonna eat your brain” kind.

The OG strains are very popular in California where a simple formula has brought great results. Since the 1990s, breeders have taken a strain and crossed it with OG Kush, developing the genetics over time and producing reliable and potent strains. These strains are distinguished from others due to their terpene profile, which characteristically includes caryophyllene and myrcene, giving it the familiar floral and diesel aroma.

For all intents and purposes, this is a pure Indica beast. Everything you love about Indica, Zombie OG brings to the table. The high comes on hard and fast, with euphoria and sedation taking place nearly immediately. Your mind and body will be in conflict, because you’ll feel so happy, but at the same time lacking motivation to move. Recreational users will experience couchlock, while the more experience user will find themselves in a relaxed introspection. An ideal strain for taking of a load, following a long day, or for helping you get to sleep after a chill day. Medical uses are in abundance, as Zombie OG is great for treating pain, inflammation, and insomnia, to name a few. Lastly, though you will not crave human flesh, Zombie OG is one of our favorite strains for appetite stimulation. You might want to prepare your meal beforehand, though.

While a Zombie comes back from the dead, after smoking some Zombie OG there’s no coming back. The buzz is heavy, turning your body to stone like looking at Medusa!

This predominantly Indica-cross of Blackberry and OG Kush has many features. Although you’d expect a Blueberry cross to feature a berry-like flavour and scent, it veers towards earthy and pine. A hint of lavender is present to top it all off. Due to its high myrcene content, the medicinal and sedative effects are world-class.

Medical cannabis patients will love Zombie OG because of its heavy indica genetics. Some studies show that cannabis may be able to alleviate several issues associated with swelling, appetite, sleep, and stress. THC tests show a range of 18 to 21 percent THC and 0.3 percent CBD. This strain won a prize in the 2015 High Times NorCal Medical Cannabis Cup. While the CBD is low, the mostly Indica effects work well for medical patients and recreational consumers who want to zone out and become zombies – the relaxed kind of course, not the “gonna eat your brain” kind.

Zombie OG may be able to relieve:

Have you been struggling to find a medication that curbs pain? Tylenol and Aspirin don’t work, and anything stronger has far too many negative health benefits. It looks like living with the pain is the only option. Think again! Zombie OG is the medicinal cannabis strain that puts its foot down on pain and gets your body feeling 20 years younger. Run for your life, Zombie OG is here to eat your brains!

Zombie OG is a preferred nighttime smoke, as it creates a serene sensation. Due to the previously mentioned myrcene content, “couch-lock” is inevitable. It’s best to keep a clear schedule and inform any friends that you might not be making it out tonight!

Unfortunately, millions of people deal with insomnia on a nightly basis. Unable to sleep, the body and mind break down, decreasing performance. Basic motor functions slow down, and the mental capacity to think drops. Zombie OG is the perfect strain to reduce your sleep-deprived state. Meaning mornings are no longer dreaded.

As with any strain which creates an intense body-high, the pain-numbing effects are of medicinal value. Zombie relaxes aches, pains and sore muscles. Those who perform hard labour, sports or don’t get enough movement in the day will find relief with Zombie OG.

When grown indoors, it’ll need around 25 growing days before flipping the lights or else it will take forever to start flowering. With around 4 plants per square meter you should be able to fill out your available space, yielding up to 500g per 600w light with its long, thick branches. This strain is perfect for making clones, and if you do you can place 25 in 3.5L pots and flower them straight away. After 65 flowering days, your plants should be ready to harvest.

Outdoors this strain grows small and compact when planted a bit later than usual – if you’re a guerrilla grower you just found the perfect strain. Its buds grow thick and dense, full of sweet aromas. It turns purple towards the end of the flowering period, making it quite discreet for guerrilla operations. It should be ready to harvest towards the start of October, yielding up to 650g when done right.

Named for the zombie-like state this strain will put you in, Zombie OG is a favorite of recreational and medical users that just happen to be in the market for a peaceful weed coma.