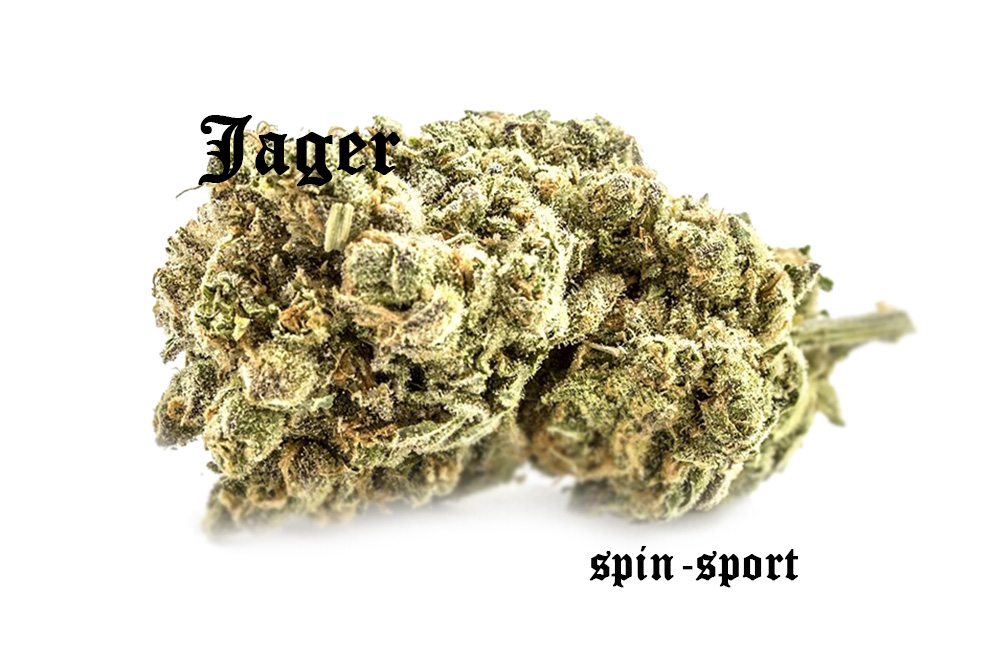 Named after a German schnapps Jagermeister, Jager is an Indica strain. The genetic lineage is not 100% clear, but the accepted theory is that this is the child strain of LA Confidential and Blue Dream, bred by an unidentified breeder from Oregon. The high THC content that ranges between 19% and 22% makes this weed quite potent.

It smells similar to licorice and carries shades of lemon, pine, and wood aromas. Its scent has also diesel traces and grape’s undertones. Jager strain has anti-inflammatory, calming, and analgesic effects. Its cerebral and physical effects put smokers into relaxed, sleepy, and uplifting feelings, so this marijuana is ideal for evening usage before bed.

Jager Strain is named after the famous German alcohol brand. The reason for this strain’s name is the fact that it, like the alcohol, has a licorice smell to it and it tastes great. Its taste can be bettered by vaping it inside a flower vaporizer. The effects are overwhelmingly indica, but it has enough Sativa inside it to allow you to continue on with your day without feeling too zoned out.

What does Jager mean?

Most people think of the drink when they hear the name “Jager.” There are all sorts of strange questions people come up with regarding it: for example, Jägermeister does not have deer blood in it. The German translation for the word “Jager” is “hunter.” With a 35% alcohol percentage and an intense list of ingredients that include all sorts of herbs and spices, Jager is a shot that could easily knock you out. The marijuana strain is just as likely to take you down. Keep reading to find out why!

Jager is an Indica-dominant hybrid strain, thought to have been originally bred in the United States, in Southern Oregon. Known for their attention to cannabis genetics, it’s very likely that Jager originated here since it’s one hell of a dank strain. Its effects are similar to that of the Hindu Kush, which is, of course, why people believe its genetics include the Hindu Kush. Jager is an 80/20 Indica-dominant hybrid that tastes great and has strong Indica and Sativa effects. It’s definitely a nighttime cannabis strain, as the indica genetics shine through a lot stronger than its Sativa ones.

As mentioned before, the exact origin of the Jager strain is unknown. Most people think that it’s a Hindu Kush relative, but some people argue that it’s not. The deep purple leaves aren’t any help, as they’re simply results of a growing technique: they’re not natural like in Granddaddy Purple. The genetics of this strain isn’t known, but the most commonly associated options are:

Some people think it’s simply a descendant of Hindu Kush with some other strains inside, others think it’s Blue Dream X LA Confidential.

The average Indica-dominant strain has around 12.5% THC, but Jager is much more potent. It’s not overly potent, and the fact that it’s an Indica-dominant hybrid means that the high is relaxing, and doesn’t completely destroy your mind. The average phenotype or growth of Jager has about 20% THC, and the stronger phenotypes and grows have about 23%. This makes it a mid-range potency, as anything above 25% is considered very potent. 15-25% is considered to be medium potency.

Because it’s difficult to find Jager, the average price will run you a little higher than average. You also won’t be able to find the seeds online from the original breeder, which adds to the difficulty of finding it and ups the price. If you can get your hands on it in Amsterdam you’re likely to pay around $20/gram. In a dispensary you’ll pay about half that. In our opinion, when you consider that this is a dankenstein strain, that’s not a bad price at all!

With Jager you’re going to get berry flavors. This makes it a popular strain for its taste. The taste is also part of what leads people to believe the Blue Dream is one of its parent strains. If you’re unfamiliar with Blue Dream, it has a great berry taste. You can really enjoy the taste of Jager if you grind the herb up first and then vape it inside a flower vaporizer. Flower vaporizers are also much healthier and the taste is far better than smoking a blunt or a joint. This is because there’s no combustion of plant matter and therefore there are no by-products that you end up inhaling.

Jager would be a good choice for making into concentrates if you can find it insufficient enough quantity. This is because you make about 1/10th of the weight of herbs when you make Butane Hash Oil. The other consideration to keep in mind is that it’s very dangerous to make BHO.

Making edibles is much easier than making Butane Hash Oil. You can very easily make extremely potent edibles. You just need to follow the two golden rules of creating edibles:

If you don’t follow both of these steps you may as well throw your cannabis in the bin. Decarboxylation basically activates the THC in your weed, which is what gets you high; raw weed won’t do that.

This Indica-dominant hybrid has some fantastic body effects. Jager will instantly melt away stress as you take your first hit, and the effects will roll into a relaxing, sleepy high. However, there’s enough cerebral energy inside Jager to ensure that you don’t feel too lethargic. If you’re looking for a strain to help deal with stress, pain, insomnia, and, in some people, depression, without feeling completely zonked out, then Jager is your friend.

The flowering time of Jager is around 10 weeks. If you leave it for a little bit longer, then not only will the potency be better, but the taste will be as well.

Jager can have very distinctive purple hues to it. This is purely aesthetic and doesn’t have any bearing on the effects at all. It does make the leaves look a lot nicer. To do this, simply decrease the temperature to 15 degrees at the beginning of the vegetative stage. Also, you will have to top this strain, which means trimming the leaves at the top of the strain. This allows light and nutrients to get to the bottom of the strain and increases yield.

The seeds for the Jager strain are not available online, and it is therefore extremely difficult to find this strain to grow. There are many companies that claim to sell this strain’s seeds, but the likelihood of them being real is very low.

The yield of Jager, when grown correctly with the best growing techniques, is about 2.3 ounces per foot squared, which is a pretty good yield.