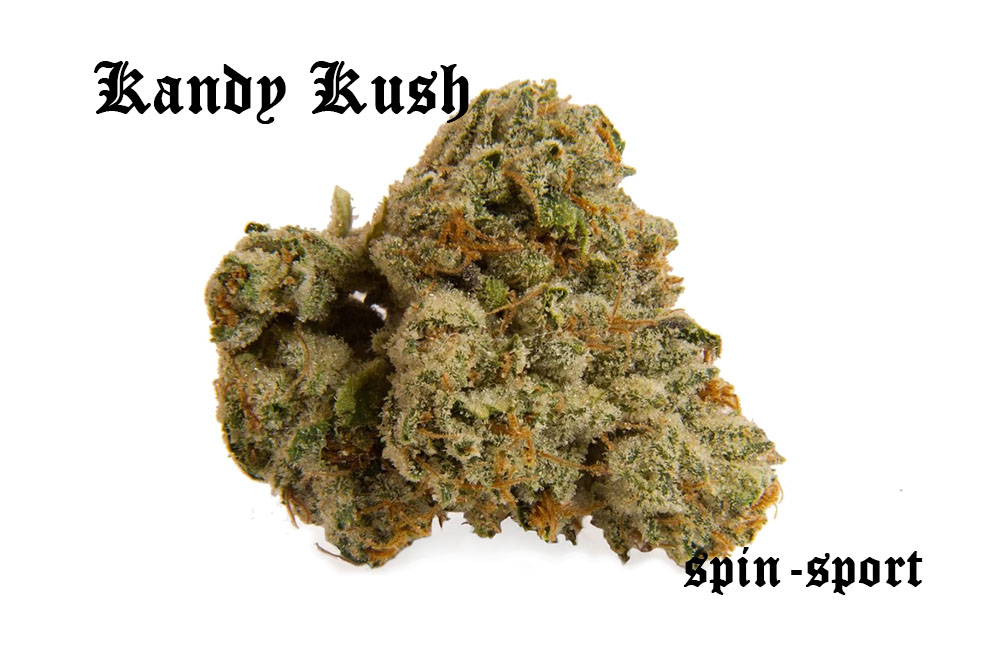 Remember the insanely popular game candy crush that took the gaming world by storm? In some ways, Kandy Kush is like that when it takes over you and brings you to a new high. Hey, maybe the game developers name their game after Kandy Kush, also known as Candy Kush?

This strain is an evenly balanced Indica/Sativa strain that traces its lineage to OG Kush and Trainwreck. It has a sweet citrus with a slight skunky taste that makes it a great choice at the end of the day or evening. Think of it as the cannabis strain of choice to unwind and relax.

People do different things to create a distraction once dealing with stress or anxiety issues. What happens is that even in doing something else, the mind remains disturbed and tension remains in the body. And that is where medical cannabis can become useful.

A few puffs of Kandy Kush and a calming sensation creeps into the head pretty quickly. A little too much, though, it becomes a couch locker.

Kandy Kush  is one of the most potent medical cannabis if you are seeking relieve stress. Once it hits you, a general sense of calmness envelopes your mind and uplifts your spirit.

As its effect works its way down to the body, a sense of relaxation reduces the tension in your body. And that is why it is taken in moderation and at the end of the day when it is time to rest and chill.

Besides the generally happy mood, some smokers may also experience a sense of euphoria, so expect to have that blissful smile on your face, and possibly, a little giggling. For novice users, the sudden head rush can fool people into wanting to take a few more puffs. But once the sedative-like quality begins to take its effect on the body, you may find yourself unmoving and in a mindless bliss.

For those who lack the appetite, Kandy Kush may help with that. In fact, those who do have a need to shed off a few or more pounds should be wary of eating too much, if that is one of the manifestations of its effects.

The general effects of the Kandy Kush strain lean heavily towards the euphoria side of the spectrum and are characterized by a powerful happy and relaxed feeling. This euphoria is often described as a “hybrid-type high” that results in a vibe that is chill but still cheery and actively engaged. Indica-heavy strains like Kandy Kush have been known to produce very powerful body highs that can cause extreme couch-lock. Be prepared.

Kandy Kush goes to work almost immediately producing dopamine that results in intense cerebral effects followed by a heavy, time-stopping body high. Because of this, and the fact that highs can last from 2 to 2.5 hours, Kandy Kush is recommended as an evening strain for most users.

The nice thing about the Kandy Kush strain is that its side-effects are almost non-existent (as marijuana goes) and the side-effects that it does have can be dealt with fairly easily. Anxiousness, headaches, and dizziness are on the extreme low end of the scale so you don’t have to worry about that backlash. What you do have to worry about (or at least deal with) is dry eyes and dry mouth. Kandy Kush can cause a middle-of-the-road dry-eyes effect but dry mouth is what you really have to look out

One thing Kandy Kush does is that it could make you feel dry and that is why you need to drink lots of fluid to stay hydrated, and keep your mouth moist. On rare occasions, and especially when smoking too much, it may also cause dry eyes, cause mild headache or induce slight paranoia.

As with other strains that exhibit these drying side-effects, a couple drops of saline solution and a water bottle will have those licked in no time. Just be glad you don’t have to worry about anxiousness, headache, and dizziness.That said, Kandy Kush does exhibit a pretty intense sleep-inducing effect so you might want to think about staying at home (or at least near a couch) with this strain. While not a side-effect, per se, drowsiness certainly isn’t conducive to outdoor activities (unless it’s sleeping on the lawn). So order a pizza, find your spot on the sofa, fire up a fatty of Kandy Kush, and spend some quality time inside.

That said, Kandy Kush strain does exhibit a pretty intense sleep-inducing effect so you might want to think about staying at home (or at least near a couch) with this strain. While not a side-effect, per se, drowsiness certainly isn’t conducive to outdoor activities (unless it’s sleeping on the lawn). So order a pizza, find your spot on the sofa, fire up a fatty of Kandy Kush, and spend some quality time inside.

History Of The Strain

Kandy Kush is a hybrid strain originally produced by DNA Genetics and created by crossing two indica and sativa powerhouses:  OG Kush and Trainwreck. It’s original, and most common, form is predominantly indica-dominant (about 60%) thanks to its OG Kush parent. Other forms that pop up now and again, hold more of a likeness for the Trainwreck side of the family and display decidedly sativa structure and characteristics. That said, the indica-dominant strain of Kandy Kush is by far the most common and is what people are jonesing for when they need to satisfy their sweet tooth. Newer strains introduce even more of a candy vibe with flavors like cotton candy, rock candy, caramel candy.

So, Kandy Kush is also called Candy Kush, and that is because it does have a sweet fruity smell that will remind you of candies. Its aroma is one of the reasons for its popularity as it seems that the smell is agreeable to most medical cannabis users.

Not only does Kandy Kush smell good, it also has a flavor that is pleasant with the right blend of sweet berry candy aftertaste with a strong hint of citrus. If you do play Candy Crush and find enjoyment in doing so, Kandy Kush is on a different level as you could not only smell it, you could taste it, too.

Kandy Kush is used often to help deal with stress. Smoking just the right amount, you are still able to function as normal. But a little too much and it could leave you sitting on the couch visiting dreamland, which is not totally a bad way to escape the realities of life, in rare instances.

Some people use it to help deal with depression, and even mild forms of PTSD. Normally, this should be fine if depression and PTSD are mild, but also remember that these could be serious health concerns, so never neglect to seek professional help.

Kandy Kush’s euphoric effects and easy smoke make it a great remedy for a variety of ailments including insomnia, chronic aches and pains, migraines, and even anxiety and mood disorders. It’s even recommended by some doctors for complications due to bipolar disorder and sleep apnea. Like most marijuana strains, it’s better at some things than at others, but for a good general high that does what it’s supposed to, Kandy Kush can’t be beat.

This well-balanced Hybrid can be the strain many medical marijuana patients are looking for to offer them some relief from a range of symptoms.

The OG Kush cut used is thought to be Christopher Wallace. You can expect to feel the Sativa effects of this strain first.

THC levels are typically high, hovering between 15 and 21% depending on growth conditions.

Some growers may differentiate between “Kandy Kush” and “Candy Kush”. Some “Candy” varieties are a Blue Dream and OG Kush cross. So, it’s best to ask your breeder or budtender which type you’re picking up.

The balanced hybrid effects are paired with a distinct, sweet aroma. This strain features a sweet, floral scent with hints of lemon, pine, and a little pungency.

Most plants feature tight, popcorn-like buds. Flowers tend to be mostly green, though some violet coloration can peek through.

Kandy Kush can be grown indoors using the Screen of Green (ScrOG) method and has a flowering time between 65 to 75 days. It also has a good size yield of some 14oz/m2. Also, you could also apply the methods of low-stress training (LST) to help improve its yield.

Because it is mold-resistant, growing outdoors and in a cool climate is perfect of Kandy Kush. It has a yield of around 18oz/plant.

One of the most potent medical strains, Kandy Kush will make your stress and anxiety go away after a few puffs, and leave you with a sense of calmness and bliss. If that’s the kind of effect that you’re looking for.

Kandy Kush is beneficial for both recreational and medicinal use and can be used for any number of intents and purposes. If you haven’t tried this tasty strain, why not give it a whirl. What’s the worst that can happen? You’ll feel awesome (physically and mentally), have a good meal, get a great night’s sleep, and maybe have some dry eyes and a dry mouth? I’ll take that experience any day.