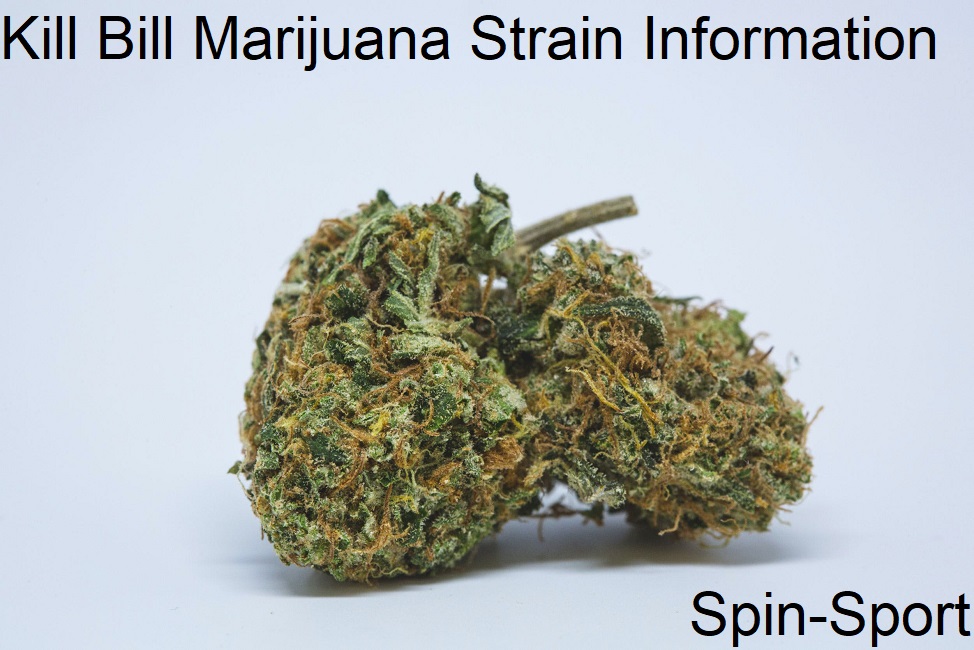 Kill Bill, a cleverly named cross between Killer Queen and Willy’s Wonder, is a hybrid strain that seeks out and assassinates stress, pain, and appetite loss like a vengeful Uma Therman. This skunky, piney hybrid from Reservoir Seeds delivers a flood of cerebral energy coupled with an overpowering calm that envelops the body from head to toe. Growers can raise Kill Bill plants outdoors or indoors in either soil or hydro gardens, so long as these buds are given at least 7 or 8 weeks to fully mature.

Named for the uber-popular Quentin Tarantino franchise, Kill Bill is a balanced hybrid created by Reservoir Seeds. The strain is a cross between Killer Queen and heavy indica Willy’s Wonder and carries a uniquely floral aroma. It also offers consumers a smooth balance between mental and physical effects. Kill Bill’s THC content has been gauged at between 15% and 30%.

Kill Bill’s distinctive flowers are impressively large; these walnut-sized buds have a roughly rounded shape and cling together in an unmistakably indica structure. The small leaves, which spiral tightly inward toward their stems, are a mossy green and are offset by vibrant yellow hairs (which are actually pistils, reproductive structures meant to catch pollen). Finally, resinous white trichomes cover every visible nook and cranny of these eye-catching flowers.

Despite its violent name, Kill Bill has a pleasant and mellow aroma. The buds have a fresh, floral smell, accented by some woodsy, earthy notes. Grinding up the buds, on the other hand, gives off more of a tangy, skunky odor. Despite this acrid scent, though, Kill Bill’s flowers burn with a smooth and palatable smoke when combusted in a pipe or a joint. It tastes sour and somewhat herbal on the exhale. Smokers who are trying to maintain discretion should be warned that this strain can be very pungent.

Kill Bill sets in quickly, exerting head-focused effects on the unassuming smoker. Initially, strange tics may manifest, like a twitch or an increased pulse in the temples. Some fans also report reddening in the cheeks or a stimulation of the salivary glands. Soon after, consumers tend to experience a change in their patterns of thinking, characterized by more intense or ponderous attention paid to otherwise mundane topics. Thoughts may also flow more quickly than usual, jumping from one to the next in free association. This focused mindset can allow for work on complicated, detail-oriented tasks, as well as creative personal projects. It can also encourage chattiness in social situations, even when it’s shared with relatively new acquaintances.

After some time, Kill Bill begins to supplant its stimulant effects with more relaxing ones. Smokers may feel distinctly relaxed as they find themselves able to breathe more deeply. At this point, any traces of bodily tension may evaporate, giving way to a slow, sinking feeling in the core and limbs. That’s not to say that Kill Bill will totally immobilize all users, though; couchlock only becomes a danger as dosage is increased. In fact, this strain’s eventual combination of mental and physical effects makes it a fun accompaniment to activities that require both the body and mind — like exercise and, under the right conditions, sex. Because of its slow dip in energy levels, Kill Bill is recommended for later afternoon or evening toking.

Kill Bill’s versatility can have some benefits for medical cannabis patients also. The cerebral head high that comes with the strain’s onset may allow those with attention deficit disorder to maintain extended focus. Additionally, its mood-enhancing properties can be a temporary relief for those with mild to moderate stress or depression. On the physical end of the spectrum, this bud may alleviate aches and pains, both long term and temporary. Its anti-inflammatory properties, meanwhile, can take care of everyday afflictions like nausea and cramps. Because its thought-provoking nature can veer into paranoia in the wrong set and setting, however, Kill Bill is not recommended for patients who are prone to panic or paranoia.

Seeds of Kill Bill have not been made available for purchase online. Prospective home growers should obtain clippings of healthy plants of the strain that can be fostered as genetically identical “clones.” Kill Bill can be grown indoors or out, with outdoor cultivation calling for a semi-humid climate with daytime temperatures between 70 and 80 degrees Fahrenheit. Plants are on the short and bushy side and usually flower within 7 to 8 weeks when grown indoors.

Kill Bill is an evenly balanced hybrid (50% sativa/50% indica) strain created as a cross between the hugely popular Killer Queen X Willy’s Wonder strains. With an average THC level between 15-19% and a flooding combination of well-balanced effects, Kill Bill is perfect for any fan of its namesake movie and beyond! Upon the onset you’ll be hit with a wave of cerebral energy that leaves you uplifted and motivated with a sense of focus and creativity. This sativa head high is accompanied by an overpowering calm in the mind and body that leaves you utterly relaxed and at ease. You’ll feel completely blissful and at peace with a sense of motivation that keeps you functional. Because of these effects, Kill Bill is ideal for treating chronic stress, chronic pain, depression, and appetite loss. This bud has a classic aroma of skunky pungent pine and a sweet and delicious taste of pungent skunky pine with a hint of spicy floral rose upon exhale. Kill Bill buds have fluffy popcorn-shaped dark olive green nugs with rich purple undertones, deep amber thin hairs, and a completely frosty layer of white sandy crystal trichomes and visible drops of sticky sweet resin.

This marijuana strain is a powerful Indica dominate hybrid, with genetics crossed from Killer Queen a hybrid and Willy’s Wonder a pure Indica. Kill Bill Earns its name rightfully first from the extremely pungent floral and skunky smell that hits you as soon as the jar opens and secondly for its knock out levels of THC coming in on average at 25%. This flower is light olive green in color and covered with thin golden hairs. The nugs are noticeably covered in crystals giving them a frosty exterior and stickiness to the touch . The smoke has a sweet earthy rose taste that is delightful out of a joint.

How Can You Use Kill Bill OG Kush Marijuana?

With this cannabis the relaxing effects take hold immediately giving your mind and body a calming effect that most seasoned OG Kush smokers desire. Kill Bills cerebral powers have been sited to help treat eye pressure “glaucoma” and head aches. Its genetics have also been attributed to a cause a hefty appetite so those needing a boast of hunger give this herb a try! Kill bill over all is a A plus top shelf well balanced strain that will leave every smoker satisfied.

Kill Bill is an indica-like cultivar that grows into short, bushy plants with dense branching. The strain grows well both indoors and outside, flowering in seven to eight weeks and late September in the respective environments. Kill Bill prefers semi-humid climates with warm daytime temperatures. In ideal conditions, it produces high yields up to 18 ounces of bud per plant.