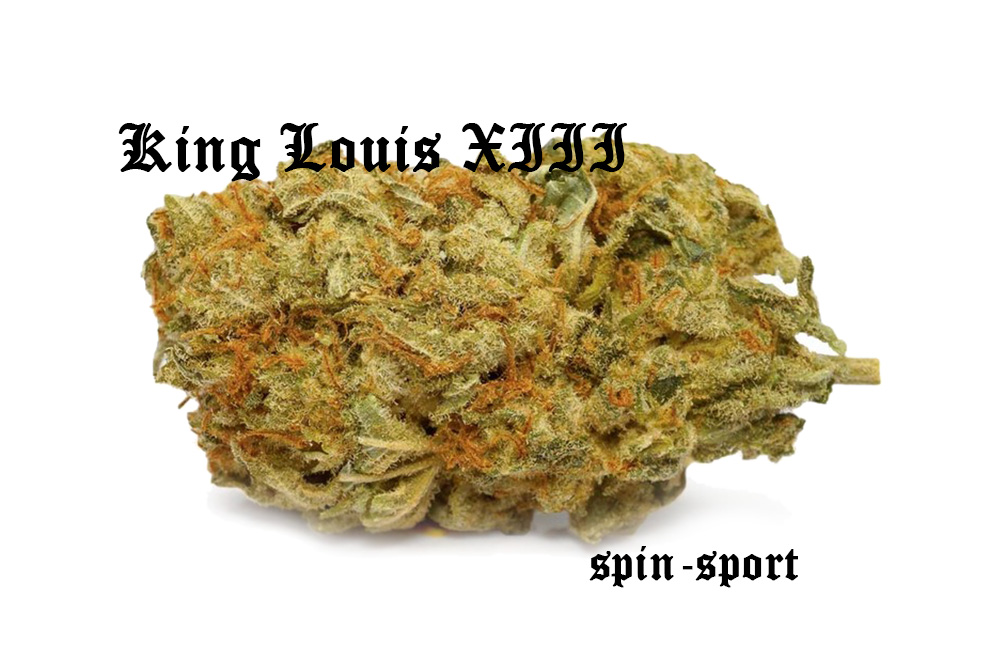 The King Louis XIII strain may not be from the same time period as the King of France himself, but it is however just as powerful and mighty. The King Louis strain is an indica-dominant strain that is super high in THC and can really pack a punch. It can make one super euphoric and then sleepy, so it’s best saved for evening usage after the day is out.

Unlike some of his successors who bore the same name, Louis XIII was one of Europe’s most respected monarchs. He was the French king for 33 years in the early 17th century and became ruler at the age of nine after the assassination of his father, Henry IV. After winning numerous battles against the Spanish, Louis was regarded as one of the most powerful men in Europe by 1642.

Alas, he succumbed to tuberculosis at the tender age of 41, 33 years to the day of his father’s death. Like the monarch, the King Louis XIII strain is extremely powerful and commands respect.

What is the King Louis XIII Strain?

This strain is a private reserve strain. If you’re unfamiliar with what this means, this is the highest shelf on an exceedingly tall shelf. You’ve heard of top shelf, now imagine on top of this shelf, and you’ve got King Louis XIII. A regal name for a royal strain, you will not be disappointed by this strain. It was bred on the West Coast, and the name is probably more well known in California than its namesake. It’s also very popular in other places, for example, Amsterdam, where it can be found in a lot of the higher quality coffeeshops.

King Louis XIII is a potent strain, often testing at over 20% THC. It was bred from the infamous OG Kush and is a great strain for things like insomnia. Thanks to its indica-dominant nature, King Louis XIII is great for use at night. Owing to it not being completely indica, it is also a good choice for relaxing during the daytime. It will not leave you couch locked, which is also great. If you fancy a chilled day, maybe when you have a little bit of work to do at home, look no further than this flavorful, potent strain.

While there is a pine scent, King Louis XIII strain marijuana is known for its pungent odor which is noticeable from a different room. It is very much Louis OG in terms of how it fills an area with its sweet, musky, yet spicy aroma which sets up the senses nicely for smoking.

Given how powerful its scent is, you may be relieved to know that King Louis XIII doesn’t taste quite as strong as it smells. Even so, it is a mouthwatering strain with an earthy spiciness and sticky taste as you exhale.

The calyxes of this strain are circular and dense. Its light green buds are coated with gorgeous trichomes when in bloom and it is brighter than most strains in the OG family.

When you have King Louis XIII seeds, you have the option of growing indoors or outdoors. If you have the space and private land, growing outside also means you must live in a sunny and dry climate. We recommend that you try growing other strains first to get experience because this isn’t the easiest to cultivate.

If you grow it outdoors, make sure the daytime temperature is between 68- and 80-degrees Fahrenheit. King Louis XIII will be ready for harvest by the end of September or in the first week or two of October. While flowering time is between 8 and 9 weeks, some growers try and harvest early because it is still an excellent yielder. However, waiting an extra week helps bring out the sweet pine flavor it is best known for.

If you choose to grow this strain indoors, consider a hydroponics setup. King Louis XIII responds well to the Screen of Green (SCROG) or Sea of Green (SOG) methods; especially if you fill your growing space with clones. When you train your plants and force them into flowering a little earlier, you can continually rotate your cannabis garden.

Indoor growing also has the benefit of protecting the plants from harsh weather. King Louis XIII is susceptible to mold from excess humidity outdoors, so be careful. It is a hungry strain so include lots of Nitrogen in the vegetative stage, along with added Phosphorus, Calcium, and Magnesium.

Your outdoor yield should be around 21 ounces per plant. Indoors, it is 18 ounces per square meter planted, but you can boost it by introducing extra carbon dioxide into the grow room.

Although King Louis XIII typically has a THC of between 20% and 24%, we have heard reports that it tops out at 28%.

This strain has minimal CBD; usually less than 0.1%. Therefore, the THC to CBD content is usually over 200:1.

What to Expect When I Use King Louis XIII Weed?

With a very high THC content and little or no CBD to ‘take the edge off,’ the high provided by King Louis XIII weed is extremely potent. One unusual aspect of this strain is that the high isn’t necessarily predictable. For example, while some users say they get a high filled with anxiety, others claim it makes them feel relaxed and happy.

It is also important to note that King Louis XIII could send you to sleep if you use too much of it. However, as long as you are sensible with the dosage, this strain can help you feel more positive. It is an excellent option for a quiet night in and often provides users with a heightened sense of euphoria. If it doesn’t cause you to become drowsy, you will probably have a severe attack of the munchies.

Medical marijuana patients will be feeling pretty royal themselves once they take a few puffs of this potent strain.

King Louis XIII is undoubtedly one of the most potent OG phenotypes out there. As it is so potent, it has an array of possible medical benefits. First and foremost, it can keep you calm, which makes it a reasonable option for patients with chronic stress. As it has the potential to knock you out, patients with insomnia may discover the joy of sleep when they take a decent dose.

When you use King Louis XIII, you may find yourself somewhere between euphoria and being too high to care about stuff. As a result, it could be the ideal tonic if you suffer from depression, anxiety, or stress. Its potency also means it can be used as an analgesic so consider it if you suffer from inflammation or muscle spasms, or as an appetite booster.

With weed this potent, there are always side effects attached. In this instance, King Louis XIII may cause dry and itchy eyes and dehydration. If you use too much of it, you may have a feeling of anxiety. In rare instances, it can cause dizziness and paranoia.

This is definitely a strain that carries a royal seal of approval. The smell and flavor are truly outstanding, and one leads you to the other, which ultimately makes it a hard strain to put down. However, you must be careful when using King Louis XIII because it is extremely potent.

If you need something to help you sleep, reduce the pain you feel from certain medical symptoms, or to simply feel better, consider purchasing this strain. King Louis XIII is best grown indoors where you have a greater semblance of control of growing conditions. It doesn’t like a humid climate and needs to be fed heavily and often. As long as you use responsibly, it is a top-shelf strain ideal for a comfortable night on the sofa.

How to get High off White Out