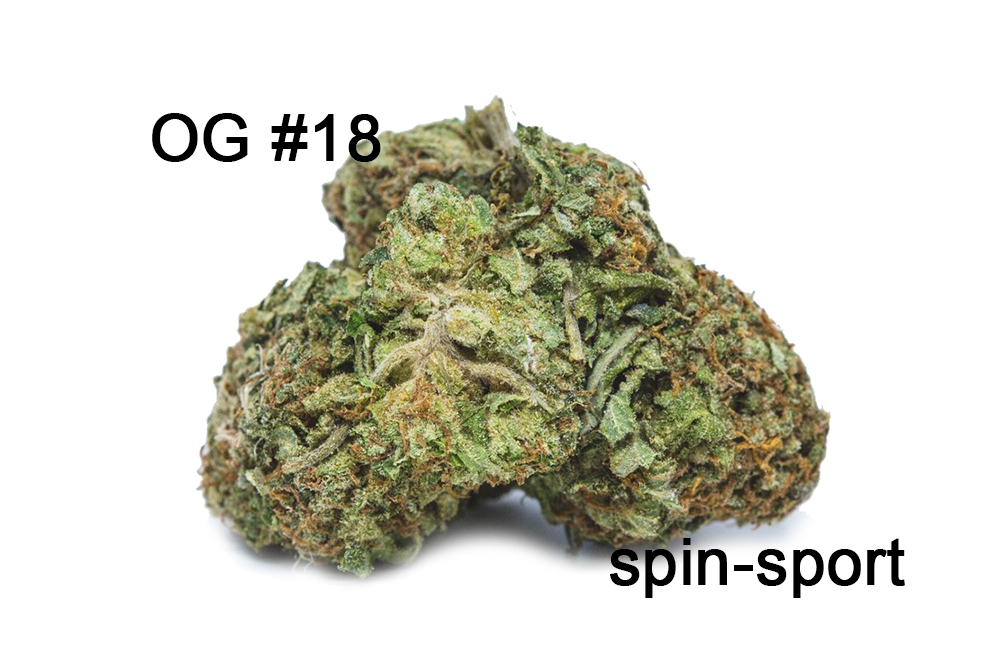 OG #18 is a phenotype of OG Kush, a strain that has been used to breed countless other popular and successful strains. Not to be left out, OG #18 went on to become not only a popular strain itself, but have also won several accolades, solidifying its position as one of the best cannabis strains ever. Being Sativa-dominant, the effects of this strain are mostly felt in the cerebral head high.

Around two decades ago, there was a highly popular strain that became the base of so many other hybrid strains today. One of its phenotypes has also made a name for itself. OG #18, a descendant of the legendary OG Kush, is also a multiple time winner of several cannabis cup awards.

OG #18 comes from DNA Genetics and is a phenotype of OG Kush. It is a sativa-dominant hybrid, also known as ‘Private Reserve.’ It provides an intense cerebral high soon after use and could help lingering doubts and worries melt away.

Soon enough, the body high takes hold, and the strain’s sedative effects begin to kick in. Some users suggest they feel happy and clear-headed, though they don’t have an inclination to move around! Please note that the high from OG #18 could last several hours. You might also experience an increase in appetite.

OG #18 gives a head rush that can be described as one that focuses one’s attention to the euphoric sensation, and where care for anything else wanes. One user describes it best in that it allowed him to have much more fun in playing video games, but could not do pretty much anything else. Cleary, this strain is one of the best when you have the intention of feeling relaxed.

As its Indica side starts to kick in, a sense of total body relaxation creeps in. Feeling good with not a care in the world, another user describes the experience as time passing by without one being aware of it. As its effects begin to wane, consumers are most likely to feel hungry.

OG #18 is a great strain to use during the day or night in a casual setting with friends. For some people, one effect it has on them is being more energetic, while others have a heightened sense of focus, but as alluded to, the focus seems to be more on recreational activities.What the OG #18 is also popular for is its impressive medical benefits, which is described in another section.

OG #18 has a strong odor in the onset which becomes more intense as it nears its flowering stage. It has an overlaid scent of fuel and skunk with a sharp, strong smell. The fragrance of this strain is not mind-blowing, but it is also not the kind that would make one want to avoid it.

OG #18 emits a pungent odor when it grows, which becomes stronger as flowering time nears. In addition to a smell of diesel, you could also detect some earth like notes or catch hints of citrus mixed in as well.

Despite the underwhelming smell that doesn’t catch your attention, it has a great taste of Kush with hints of fuel and pine. It might remind some people of a Pine-sol. For many of the customers who have logged into OG #18, the flavor is often described as “not bad”.

When you first start smoking OG #18, the flavor that will become apparent is a diesel taste. Those used to Kush strains will get a familiar fuel and pine taste. Rather than smelling citrus with your nose, you’ll burn your tongue upon tasting sourness.

OG #18 buds are often bulky, thick, and resinous. The stickiness is due to the white trichomes. There are also many orange pistils that provide an attractive appearance overall.

The only adverse reaction that users have experienced with OG#18 is a dry mouth. Drinking water and staying hydrated will help to combat dryness in the eyes as well as a headache.

This strain has strong sedative effects that work rapidly on the brain. If you overindulge, this feeling will take over and leave you with a powerful need to just lie down and relax. Make sure that you’re prepared to lay comfortably.

There is also the occasional risk of anxious thoughts after smoking OG #18. However, these symptoms often only start to show when someone is already suffering from an anxiety disorder.

Used mostly by cannabis users for relaxation, OG #18 is also a strain that offers potent medical benefits. IIt is very popular for people who have to deal with chronic pains. It can also be used to treat mental health issues such as stress and anxiety.

OG-18 is a potent strain for those purposes, but not all strains have clear medical benefits.

As its effects wear off, users tend to feel hunger, making this strain good for those looking for a way to improve their appetite. Some gastrointestinal issues such as nausea can be soothed with OG #18. Used at evening time, it also helps those struggling with insomnia sleep well.

OG #18 is a stronger strain than OG#17, with a reported harvest size of up to one-third larger. It can be grown outdoors or indoors, as well as in greenhouses. One advantage of growing cannabis indoors is that you can control the environment to avoid mold and mildew, but this plant is resistant to those problems.

OG #18 cannabis plants usually have an average THC content of 16-18%, though some versions may have around 20%

OG #18 features a minimal amount of CBD, and is typically around 1% or less.

Grown indoors, OG #18 is also suitable for hydroponics and the Screen of Green (ScrOG) method. It’s flowering time can be 8-9 weeks with a yield of 16-18 ounces.

Outside, OG #18 is perfect in a Mediterranean climate. This plant is also relatively easy to maintain, so even novice gardeners can succeed with it. Outdoor yields are expected to be around 20 ounces or more per plant by the late September to early October timeframe.