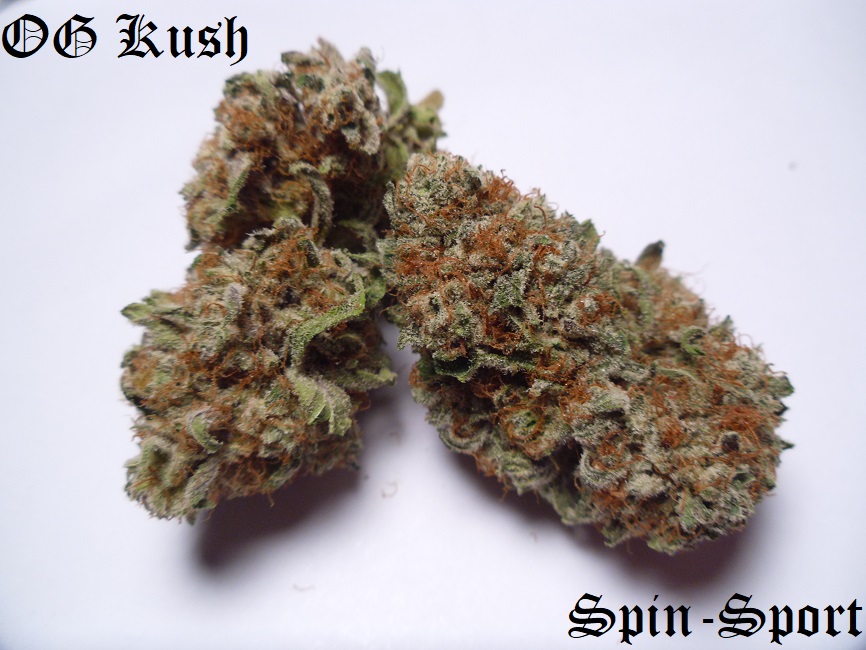 There are two stories about how OG Kush first came about. The first story says that a breeder claimed he found the seed in a bag of Chemdawg 91 in the Lake Tahoe area in 1996.

The other one says that a grower from Florida crossed a male cross of Lemon Thai and Old World Paki Kush with a female Chemdawg.

For a while, OG Kush was a clone-only strain as seeds weren’t available. Growers used to hand out cuttings to other growers in order to keep the strain alive.

However, the strain didn’t need to be kept alive, it needed to be mass-produced. People loved it.

Soon after, medical cannabis got legalized in California and the rest is history.

Researchers, breeders, and many other scientists worked on replicating and improving OG Kush. Today we have many Kush strains that are stemming from the same OG Kush genetics.

As for its name, many assume it may mean Original Gangster or Original Kush due to its Cali roots—the truth is that the breeder himself named it Ocean Grown Kush, or OG for short.

They are very green with lots of orange hairs. OG Kush tends to have a lot of resin, which is why the buds will instantly stick to your fingers.

While growing it, OG Kush will have lots of buds appearing everywhere on the plant. The plant is short and bushy with big colas sticking out of the canopy like a porcupine.

OG Kush buds are very sticky and fat so you’ll definitely want to use a grinder.

OG Kush is known as one of the skunkiest, smelliest strains that are out there. Rappers like Snoop Dogg and his peers have been praising this strain for many years.

Users tend to describe the taste and smell of OG Kush as a very pungent, almost as if a skunk sprayed nearby. This is not a bad thing in the world of weed.

It also smells somewhat piney with a hint of lemon on the way out of your lungs, which is not something you can say for every strain.

OG Kush is renowned for its strong cerebral effects. It will make you extremely relaxed and stress free.

Effects of OG Kush are long-lasting as this very potent hybrid is known for the longevity of its high. In high doses it causes serious dryness in the mouth and eyes, but you can counter that with some easy dry mouth remedies.

It can also induce mild paranoia in novice users, so take it easy the first couple of times.

Seeing how it comes with an average of 18% of THC, OG Kush is somewhat less potent than many of the strains that come from its lineage, however it’s still considered a potent strain.

OG Kush is known for being relatively hard to grow, especially for first-timers.

It flowers for about 8 weeks, although there are now versions of OG Kush out there that flower longer than that, even up to 10 weeks.

OG Kush has good genetics as far as yield and temperatures go, but it’s not very resistant to bud rot and mildew.

Seeing how the canopy can often grow quite bushy, you will need to trim OG Kush plants hard and often. If the leaves throw shade on the buds, bud rot is known to appear in mere days.

It grows well in both soil and water, however, hydroponic OG Kush tends to have much higher amounts of THC, and it’s somewhat easier to control the conditions of the grow op.

OG Kush plants require heavy feeding, especially with CalMag, aside from other nutrients.

The yield is above average, although not the biggest out there — 400-500 grams per plant, or 1.6 ounces per square foot.

Applying a SOG and SCROG is strongly advised as all the flowers will need exposure to light so that they may yield more.

Given that OG Kush can be very leafy, you must vigorously trim the leaves from the stem during harvest. Otherwise, they might introduce too much moisture into your drying room.

Where to find OG Kush?

OG Kush is widely available. This strain has made users fall in love with it over and over again, and the retailers and local black market dealers have noted that.

OG Kush gave way for many other Kush strains to break out and make a name for themselves.

In Canada, OG Kush isn’t very popular amongst the licensed producers. However, its offspring is grabbing major attention.

As for the United States, OG Kush is popular on the West Coast way more than anywhere else.

You can grow OG Kush both outdoors and indoors. For cultivating outdoors, a consistent temperature of 75 degrees is required. With indoor cultivation, the trees usually grow short ranging from 2 to 3.5 feet in height. This strain usually flowers in up to 9 weeks if cultivated indoors and gives an average yield with approximately 45 grams for every square footage. Care must be taken for proper ventilation if grown indoors as the strain has a pungent odor.

As the OG Kush energizes and increases focus, it is suitable for day time use. However, it is also equally enjoyable in the evenings.

In medicine, OG Kush has been known to provide relief from depression and anxiety albeit temporarily. It is also effective for those suffering through disorders such as ADHD and has helped with migraines and headaches.