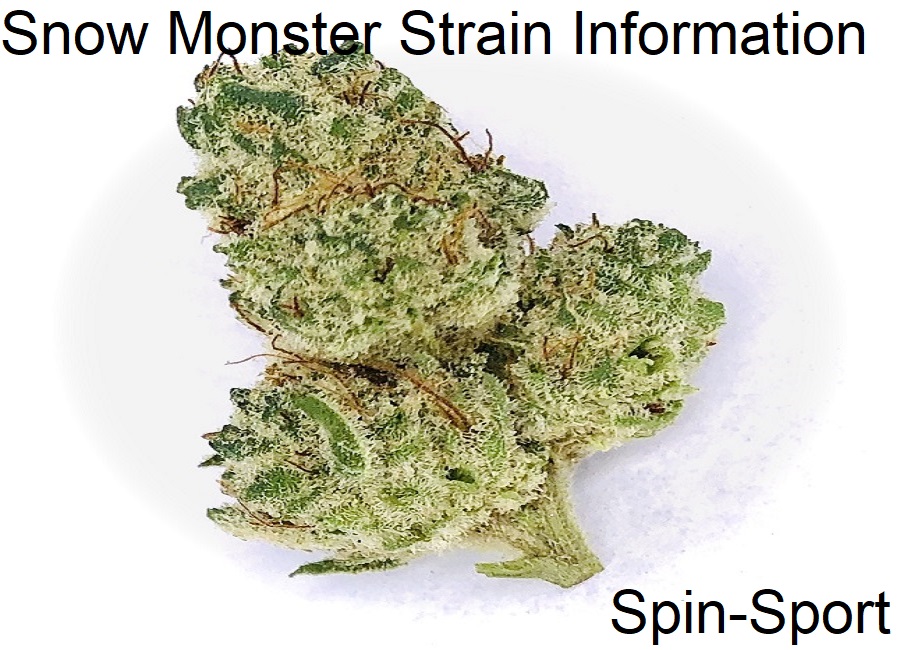 Snow Monster is an indica-dominant strain from Exotic Genetix in Tacoma, Washington.

Although she’s been around for a handful of years, Snow Monster is only just now getting the attention she deserves. Bred by Exotic Genetics and having received attention at the 2014 Cannabis Cup, this indica-dominant strain will put you in an awesome headspace any day of the week. Both The White and Starfighter can lay claim to this bud, so you know it has to be good.

Considered to be a middle of the road strain when it comes to potency, Snow Monster’s THC averages around 22%. As the name entails, nugs are completely covered in enough trichomes and resin to resemble a freshly coated piece of earth in a snowy winter landscape. Blending both savory and sweet, an earthy and cheesy flavor is offset by sweet citrus as you exhale.

Don’t try this strain if you have a full day ahead of you, as Snow Monster definitely leans toward her indica roots. Your high begins with an uplifting mental state that’s complete with happy thoughts and in some cases a bit of extra focus. A warming sensation will spread from head to toe, and as your mind soars your body will relax into jelly. Many describe this part of their high as feeling mildly drunk and in this state, you’ll be led to a deep sleep.

Imagine living your day with chronic pain and think about how a strain like Snow Monster could impact your outlook on life. With strong THC levels and sedating effects, medical users love this bud for temporarily getting away from their worries. Stress and depression are wiped away while any nagging feelings in your body are replaced with a feeling of heaviness that’s more than welcomed. Regular use of Snow Monster before bed could lead to improving your sleep and overall quality of living – but we can’t guarantee it.

The good stuff is always hard to find, at least when it comes to marijuana. Snow Monster does not seem to be available for purchase in seed form, and if clones are your only option, you can bet that they’re hard to come by. If you’ve been lucky enough to score one, keep in mind that both indoor and outdoor environments are suitable. Flowering takes about 7 to 9 weeks and yields are nicely sized.

The name sounds scary but in reality, the effects that this bud brings to your life are anything but. Snow Monster is great for a Friday night reward or could even suffice on a weekend afternoon when you don’t have much to do. Think of it as an early evening appetizer that blends cheese and lemon into a smokable treat, or what the heck, try it anytime to get nice and lit!

Snow Monster is a cross between The White and Starfighter. It can be grown indoors or out in a semi-humid climate with consistent daytime temperatures between 70 and 80 degrees Fahrenheit (21 and 26 degrees Celsius). When grown outdoors, Snow Monster should be harvested between late September and early October. When grown indoors, it has a flowering cycle of 49 to 63 days. When grown indoors, the plants produce about 340 grams per square meter of plant, and when grown outdoors, about 340 grams or more per plant, which is slightly below average in terms of yields.

Snow Monster is an indica dominant hybrid (75% indica/25% sativa) strain from the infamous cannabis breeder Exotica Genetix that’s an intensely dank cross between The White X Starfighter 42. This bud became popular after being a contender in the 2014 Cannabis Cup Competition. With a mild THC level of 21-25% and a long-lasting potent high, Snow Monster is ideal for any level of user, novice to master. Smoking this bud will give the user an onset of a cerebral high that’s uplifting and bold, before fading into a relaxed sleepy state. Snow Monster is an ideal medication for patients suffering from anxiety, sleep disorders, Crohn’s Disease, and emphysema, as it offers mind relief before reaching a state of sleepy bliss. Snow Monster buds look exactly as they sound – fluffy and dense and completely blanketed in a layer of white crystal snow. With an earthy cheesy taste that offers a hint of lemon upon exhale and a sweet citrus aroma, Snow Monster is a tasty treat that’s sure to satisfy the most temperamental of palates.

Snow Monster strain is an Indica leaned one from Exotic Genetix. This cannabis strain has competed at the 2014 Cannabis Cup, and users love it for its calming properties.

The cross between The White and Starfighter, Snow Monster cannabis has a fantastic lineage. It is fulfilled with the cheesy and earthy savory aroma with citrus notes, especially lemon, on the exhale.

As a typical Indica based hybrid, it has calming and sedative effects. But before body buzzing relaxing, consumers also admit a short-lasting uplifting and focusing effects. After that, a warming sensation spreads all over the body and all concerns and negative thoughts simply flow away. Snow Monster weed gives users the feeling that is close to an easy drunk. It erases all anxiety, stress and tension. Some consumers noted the relief with emphysema, sleeplessness and Crohn’s Disease.

The seeds of Snow Monster herb are not readily available on the market, but it’s possible to cultivate from the grown plants. It takes from 7 to 9 weeks to harvest both indoors and outdoors.

Most Indica-dominant strains have one thing in common upon use. They tend to begin with a cerebral high before the Indica properties creep into the body. At 70% Indica, it is easy for people to assume that it is not any different. Perhaps that is true but only to a certain degree.

As Snow Monster works its way into the head inducing a euphoric cerebral high, users can already feel a warm and uplifting sensation washing all over their body. Such pleasant feeling, of course, influences happiness. In many cases too, users tend to have a heightened sensitivity and sense of focus.

As the intensity of the physical high increases, users find themselves in full-body relaxation. Soon, most would also feel lazy. Even with moderate use, the potent Snow Monster can induce couch-lock.

Feeling completely at ease, many users may also experience a foggy mind that is similar to mild alcohol intoxication. Unable to move, users let themselves drown in a euphoric bliss until they fall asleep.

Snow Monster emits a pungent odor of damp earth with a skunky and sweet note. Once the buds are broken into small pieces, a citrusy note becomes more distinct. Some people may also detect a hint of nuts or coffee.

When it comes to its taste, its fragrance does not carry over. Instead, it has a richer flavor of pine and nuts with a sweet and citrusy note.

Some tests have shown the THC content of Snow Monster to be as high as 22% making it insanely potent. Hence, it is more likely to have a more pronounced adverse effect. However, these reactions are nothing new to people who have been using cannabis for a while. Expect to experience dry mouth and eyes (or having red eyes) when using this strain.

As mentioned, at the peak of its ‘high,’ the strain induces an intoxicating euphoria. At the same time, this may also cause some people to experience dizziness.