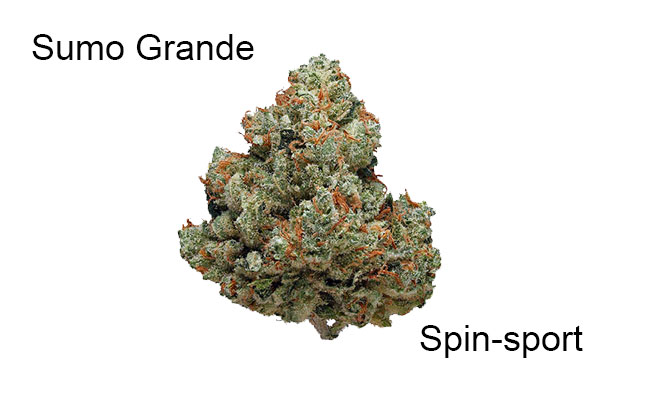 Sumo Grande is a unique cross that builds off the old school genetics of Sensi Star and Sour Diesel to create Hong Kong, which is then crossed with the sativa Nina Limone, a citrusy yield powerhouse. This gorgeous plant grows big and strong (a testament to its namesake) and creates buds that offer a motivating buzz with minimal paranoia. Use this strain as a pick-me-up that focuses the mind without encumbering the body. Sumo Grande is a proprietary genetic strain created by Colorado Seed Inc.

As their name implies, flowers of Sumo Grande are larger than average. These big boys hold together in chunky, almost spherical shapes and have a somewhat hybridized internal structure, with a dense core that is more typical of indica varieties while bearing the long, loosely twisted leaves most associated with sativas. These leaves themselves are a bright shade of spring green and are accentuated by wiry orange pistils and clustered, translucent trichomes.

When properly cured, Sumo Grande has a mostly fruity aroma, redolent of fresh citrus. A second inspection of the buds may also pick up on some woodsy notes of pine. Grinding up or picking apart these flowers, meanwhile, releases a coppery, diesel-like odor. Surprisingly, though, this gasoline scent doesn’t come through much when the strain is combusted, instead burning with a sweet, orange-tinged scent and a light and easily ingested smoke.

This almost pure sativa doesn’t need much time before getting to work. Soon after inhaling its fragrant smoke, consumers may experience a mild head rush. Some pressure in the temples may come around the same time that smokers detect slight cottonmouth or some flushing in the cheeks. Eventually, these strange sensations melt away, leaving smokers immersed in a newly cerebral mindset. Thoughts may seem to flow more quickly than usual or may take on a new complexity. Similarly, users may find themselves making surprising connections between seemingly unrelated things. As such, Sumo Grande can set the stage for productivity on complex analytical tasks; it may also provide a spark of creativity for those working on more open-ended projects or brainstorms. Meanwhile, the strain’s buzzy thoughtfulness can result in free-flowing conversation and good vibes when shared in social situations. For some, Sumo Grande’s general stimulation and jolt of energy can be a fun way to enjoy activities requiring complex coordination, like exercise, gaming, or even sex.

A sativa that’s as effective as it is attractive, Sumo Grande is a must-try for smokers seeking all-day stimulation. The bud’s unique aroma may also be of interest to terpene nerds.

Sensi Star is a potent indica marijuana strain. The effects of this strain will make you feel relaxed and sedated from head-to-toe. Consumers with a low THC tolerance should use caution when smoking Sensi Star, as THC levels have been reported as high as 20%. Growers say this strain has crystal trichomes that sparkle against dark green and purple coloration. Sensi Star can be grown both indoors and outdoors. Medical marijuana patients choose this strain to help relieve symptoms associated with insomnia.

Sour Diesel, sometimes abbreviated as Sour D, is an extremely popular strain, distinguished by the fuel-like chemical smell of its flowers. It has a mostly sativa head high with some subtle physical indica relaxation, making it popular among recreational and medical users alike. This is a potent strain, with a THC content that had been measured at between 20% and 25%.

Because the underground cannabis market of the 1980s and 90s operated without any kind of lasting documentation, the exact origins of Sour Diesel are not known. Although a definitive agreement on its original genetic makeup doesn’t exist, Sour Diesel’s popularity has made it the subject of much speculation. Some believe that true Sour Diesel was derived as a distinct phenotype of an original strain simply named Diesel. Others say that it was a phenotype of Chemdawg that leaned more sativa than indica. Still others claim that it was a cross of Chemdawg and Northern Lights, or perhaps Chemdawg, Northern Lights, and Skunk #1.

Colorado Seed Inc. keeps its growing information under wraps, but some cultivation notes are available online. The strain grows well in outdoor environments, with its sativa genetics boosting it to heights that require regular pruning. Sumo Grande grows vigorously enough in sunshine to need extra structural support to maintain the weight of its hefty buds. Sumo Grande flowers in approximately 70 days indoors or mid-October in outdoor gardens, producing high yields. Sumo Grande is only available in clone form.

Sumo Grande’s general arousal can have several medical benefits in addition to these recreational uses. Its ability to engender focus can help those with attention deficit disorders concentrate on a single task. Additionally, its constant glow of euphoria may provide a temporary distraction from the symptoms of stress and depression. Physical applications include some anti-inflammatory relief from common pains like headaches, as well as an inclination toward the munchies that may enhance appetite for those with digestive problems. Because its heavily head-focused effects come with some risk of self-directed, obsessive thinking, however, Sumo Grande is not the best choice for patients who have a low THC tolerance or are prone to paranoia.

Sumo Grande marijuana induces focused, creative, talkative, energetic, and uplifted feeling. It may also also help relieve the following medical symptoms: depression, fatigue, lack of appetite, stress, and . You may have dry mouth, , , and as side effects.

Please note that the effects vary from person to person, but based on our data and data from websites such as Leafly and Hytyiva below are the most consistent effects among users.

Because of its wide variety of effects, Sumo Grande weed is suitable for assisting with a number of medical ailments, conditions, and symptoms. Overall, Sumo Grande is considered most suitable for helping with those who are suffering from depression, fatigue, and lack of appetite.

Unsurprisingly, the most common side effects that have been reported from Sumo Grande marijuana include dry mouth, , and . If you are experiencing these effects, be sure to stay hydrated and drink plenty of fluids.

We hope you have found this Sumo Grande review to be not only enjoyable but also educational and informative.

It’s important to remember that the consumption of Sumo Grande marijuana – or any kind of marijuana – is the sole responsibility of the user, and discretion should always be taken.