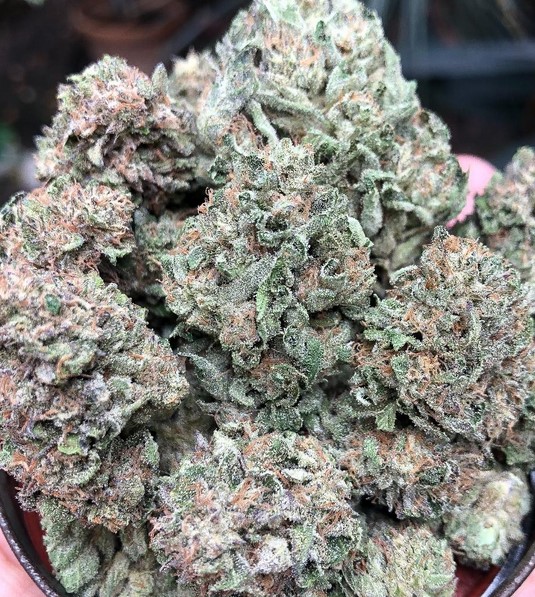 Some strains have an extremely short breeding history that is almost unnoteworthy. A few landrace types and some minor cross breedings, then nothing for decades. For certain strains, this straightforward breeding history isn’t an issue – the basic tastes and apparent effects of the high shine through.

The Wedding Gelato strain, on the other hand, is somewhat of a wild card. This strain is all about achieving exquisite balance using many parent strains from a long lineage of meticulous crossbreeding and careful arrangement.

Let’s look at this strain to see if it’s worth doing what they claim, and whether you should serve it at a wedding.

What is the Wedding Gelato Strain?

Wedding Gelato is the result of a long and intricate breeding history. Wedding Cake, as well as Gelato 33, are the foundations of Wedding Gelato. This is particularly fascinating because Gelato 33 is a fairly stable strain with few distinguishing characteristics, except for different phenotypes.

In reality, Wedding Cake is a cross of two strains that are quite different from one another: Triangle Kush and Animal Mints. In some respects, the Wedding Gelato strain has three distinct parents: each adds something unique to the mix. Because many parents can confuse the flavor and potency, this may be considered unsavory by most cannabis connoisseurs.

Wedding Gelato, on the other hand, is remarkable since it seems to perfectly balance itself between its parent strains. There’s real coherence in its effects, which somehow combine just a little of each of its parents to produce perfect harmony.

The high begins with pleasant energy pulsating waves that make you want to get up and take control of your life. Your brain will be thoroughly cleansed of any harmful or bad ideas, leaving you with a sense of limitless power and control over your destiny.

As the high builds, it will become more indica-like in flavor, relaxing and soothing your muscles and limbs to the point of utter calmness. It does not, however, cause couch lock as many other strains do. Expect to feel chilled out yet eager to go exploring or for a walk after smoking Wedding Gelato. This makes Wedding Gelato the ideal strain for a relaxed yet cognitively stimulating day.

The Wedding Gelato variety is a sativa-dominant hybrid that has a strong, sweet scent. It has an almost overpowering sweetness to it, wafting dizzyingly delicious scents that overwhelm your senses. Although this may sound horrible, the fragrance is pleasant. If you’ve ever smelled fresh raw toffee or a glass of incredibly sweet hot cocoa, you might be able to picture the Wedding Gelato aroma.

It’s strange how pleasant this strain smells when you get a chance to sniff it, and it evokes a winter’s evening.

The flavor of this strain is more complex and nuanced than its aroma would indicate. There are undertones of lemon, herbs, and a distinct vanilla taste that’s almost like pure vanilla extract. The sweetness washes over your mouth, covering it in sweetness and all its distinct tastes, making it seem almost like a delectable toffee.

Wedding Gelato’s buds are tiny and bundled tightly together, as if they’re wrapped in ribbons. The ribbons, on the other hand, are the lengthy, vibrant pistils that bind the buds together.

The leaves are a very uniform green in color, which is enhanced by the somewhat purple and orange tint just beneath the surface. You must, however, attempt to cultivate your own if you want to appreciate this strain’s complexities.

Despite the fact that Wedding Gelato is well-liked, it is not available in dispensaries on a regular basis. Royal Queen Seeds, the initial growers, sells some seeds online, but otherwise you may find difficulty obtaining them.

If you’re fortunate enough to come across some, creating Wedding Gelato is actually quite simple. Both in and out, they flourish equally well, but they do best when planted outside and benefit from the sunshine and fresh air.

The appearance of this strain’s entire growth cycle varies between sativa and indica, which can be perplexing for novices. However, you won’t have a chance to be surprised since you won’t know the distinctions between the two until after you’ve started growing your own cannabis.

There are many different phenotypes of this strain, so the best thing to do is be ready for it. When you notice that your Wedding Gelato is beginning to grow too tall, consider tying it down to a pole or trellis. However, if it develops into an indica and becomes quite bushy, make sure you trim the underbrush on a regular basis. This will encourage increased bud production as well as avoiding your plant from strangling itself by restricting oxygen and UV radiation intake.

Wedding Gelato cannabis is a potent strain bred from some of the most powerful strains available, so you can anticipate a strong THC content when you consume it. Wedding Gelato has about 25% THC, which is among the most potent varieties accessible.

If you’ve never used THC before, be sure not to smoke too much of it at once since this can induce paranoia and anxiety if you aren’t ready.

The Wedding Gelato strain has a tiny amount of CBD in it, making it very rare to find high-THC strains with much CBD content. This is true for the Wedding Gelato cultivar, which has low CBD levels. However, despite this fact, the strain still offers several medical advantages.

Wedding Gelato’s high level of THC makes it an ideal strain to calm down during stressful times. Wedding Gelato has a lot of THC, which means it’s great for banishing stress, anxiety, and sadness. You’ll almost undoubtedly find it difficult to keep any negative ideas after just a little breath.

The major medical advantage of Wedding Gelato is that it may assist with anxiety. While smoking too much at once is not suggested, Wedding Gelato has shown to be an excellent method to deal with worry. You’ll be able to resist even the most pessimistic and anxious ideas after just a little bit usage.

This strain’s high THC concentration is also helpful in dealing with pain, especially chronic pain that persists for a long time. Wedding Gelato can help people with chronic pain or severe neuropathy. When you’re riding on the euphoric and dedicated high provided by this strain, you won’t feel any aches, whether physical or nociceptive, because to its powerful psychoactivity.

Wedding Gelato is also a fantastic option for people who need to go to bed early. While it lacks the sleep-inducing qualities of marijuana, it makes it extremely simple to fall asleep. It soothes your head and relaxes your body, making it incredibly simple to nod off.

Of course, as with all powerful strains, you may experience THC-induced symptoms.

Possible Side Effects of the Wedding Gelato Strain

Wedding Gelato is a strain that delivers, and it has its own set of problems with it. Dry mouth is the first problem you’ll notice with Wedding Gelato, and it’s not something you want to miss out on. Keep yourself hydrated throughout the day by drinking lots of water. This dryness might be a real pain for long-term users of Wedding Gelato since it can make you feel weary and sluggish.

The major issue with Wedding Gelato, however, is that it may lead to the development of a few unpleasant mental conditions. While this strain is popular among individuals who use it to cope with depression and anxiety, excessive usage can make things worse rather than better. If you consume too much THC within this potent strain, you’ll feel suspicious and nervous. When compared to how many people utilize it as an anxiety treatment, smoking too much Wedding Gelato makes logical sense.

It’s also not an issue if you’re smoking a lot of Wedding Gelato at once. It shouldn’t be a problem as long as you are being particularly cautious about how much Wedding Gelato you smoke at once. Finally, the effects of this strain tend to linger for hours, posing the risk of waking up high if consumed late in the evening. To avoid this, limit your usage or simply smoke it during the day to avoid waking up high. While getting high might seem appealing, it has several drawbacks; no one wants to work or drive while stoned.

Wedding Gelato is a great example of expert crossbreeding working in your favor. With such a fascinating and varied growing history, you’d expect the taste and sensations to muddle, but instead, it’s both powerful and pleasurable.

Expect a wonderful high with the Wedding Gelato strain that lasts hours, as well as a taste and aroma profile that will make you want more.