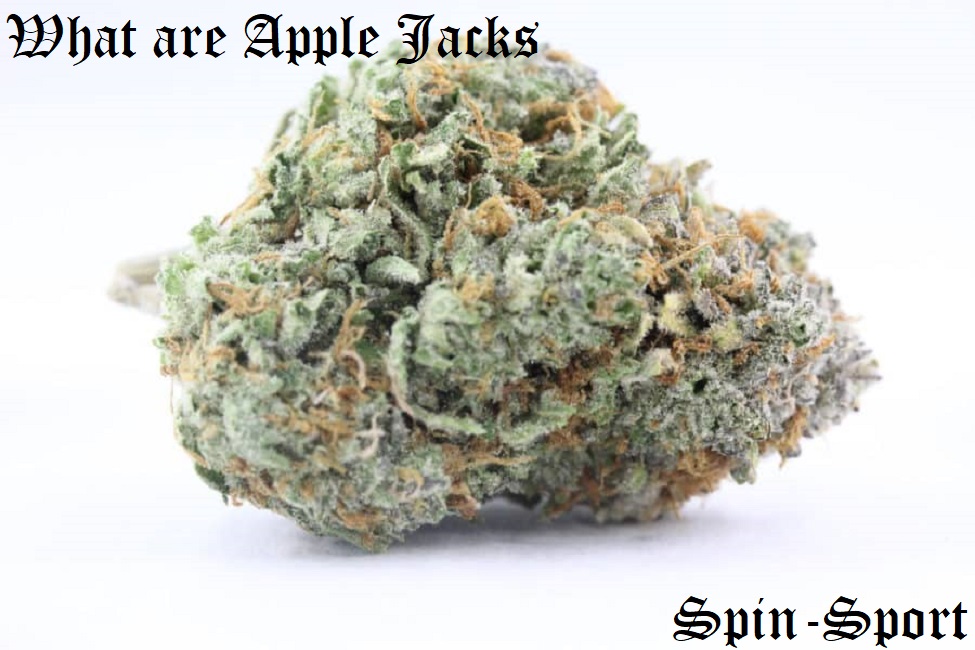 Apple Jack, as you might expect, is a really tasty bud that offers more than just a clever name and glossy exterior. This energetic bud is brought to us by Seedism Seeds, one of the top Dutch breeders and highly sought after cultivators in the Netherlands. The blend of Jack Herer and White Widow make this strain of notoriously potent genes an undoubtedly dynamic high.

In this Apple Jack strain review, you’ll learn about the derivative strain created by crossing two legendary strains that have been around for decades. Many cannabis strains are named for their aroma and flavor profile and Apple Jack proves to be no different. Those who enjoy the aromatic qualities of apples and a matching flavor profile should try this ganja strain when they get the chance.

The Apple Jack strain is a hybrid cannabis strain that teeters the line between sativa and indica. The strain was created in Amsterdam, the cannabis capital of the world for decades. The area is renowned for its marijuana, so getting your hands on Apple Jack should be a treat for every cannabis connoisseur stateside.

Apple Jack is the result of crossing the two classic strains White Widow and Jack Herer.

White Widow is a product of the Netherlands as well and is one of the most well-known strains from the early years of the marijuana industry and is still a fan-favorite today!

Jack Herer is one of the most energizing weed strains known to the industry. Yet another product of the Netherlands, Jack Herer is an elegant cannabis strain that combines potency and euphoric energy.

Using the Dutch roots to develop Apple Jack creates a local favorite that has made its way over to the US.

Prospective growers can find reputable seed banks to get Apple Jack seeds. It’s a solid strain that can be grown indoors and outdoors, giving you the flexibility to choose how to produce this epic bud.

There aren’t any popular child-strains on the market that have utilized Apple Jack as a parent-strain. With seeds available, perhaps you can try your hand at breeding your own unique child-strain.

Apple Jack growers can expect to harvest around 1.5 ounces of bud per square foot of plant if they are growing indoors. Outdoor growers can grow their plants to 4-5 feet tall and harvest upwards of 18 ounces per plant, given optimal growing conditions.

These plants can also reach that height indoors, so ensuring that you have enough vertical space is imperative to success. Topping your plants to create a bushier version of each plant and using a technique like the Screen of Green can be a good way to grow Apple Jack.

Outdoor growers don’t have to worry about topping if they don’t want to. This balanced hybrid will tend to bush out no matter what while still reaching its peak height.

The Apple Jack strain has an average flowering time of 60-65 days. The buds are dense with a rich green hue. There are also golden red undertones running throughout.

The appearance of the bud isn’t where it shines, however. The fans of Apple Jack tout this ganja for its essence and potent high.

THC levels of the Apple Jack strain are typically around 18-20%.

The high shows off the balance of indica and sativa in the heritage of this pot strain. The high hits mentally with an energy boost. It’s also great to boost clarity and creativity. Buzzing through your to-do list won’t be a problem after smoking some Apple Jack.

The physical effects are much more relaxing than it feels in the head. This creates a balanced high that isn’t too racy and won’t melt you down to the couch. It’s a productive high that users come back to for more! It’s hard to find a cannabis strain with this amount of THC while still delivering a sense of focus in the experience.

Apple Jack strain lives up to its name with a noticeable essence of apples on the aroma and flavor profile. The overall aroma and flavor are sweet and earthy, blending well with the zesty apples.

The weed strain is rich in terpenes Terpinolene, Caryophyllene, and Pinene.

Terpinolene is a fruity terpene that delivers an energy boost beyond what most other terpenes can deliver. It also breeds an uplifting effect in consumers.

Caryophyllene is the only known terpene that also acts on the endocannabinoid system. It’s spicy and is known for helping combat the negative effects of inflammation.

Pinene is the most common terpene in plant life, but it may also be one of the best for its medicinal qualities. It’s known for reducing pain, inflammation, and anxiety, making it a catch-all for medicinal marijuana strains.

The unique terpene profile and the potency of THC in this strain lead to the medicinal qualities that Apple Jack is touted for.

It is a favorite for recreational users, but it shines as a medicinal cannabis strain.

Medical marijuana patients use the Apple Jack strain for the following conditions:

For those who want to make Apple Jack a complete medicine, it can be combined with a CBD extract to deliver everything that marijuana is known to help. It can be used as one of the best forms of natural and holistic medicine!

Final Words On The Apple Jack Strain If you are in the market for a hybrid cannabis strain that provides cerebral energy boosts like a sativa and the relaxation that indicas typically bring, then look no further than the Apple Jack strain. It isn’t the most common pot strain in the industry, but you can find it at reputable dispensaries. Prospective growers should be able to find the genetics from the original breeder Seedism Seeds.